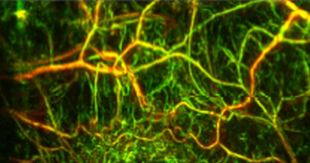 An international research project funded under the European Commission Horizon 2020 program could lead to earlier diagnosis of skin cancers through a novel non-invasive bioimaging method.

Launched in March 2016 at the Technical University of Munich (TUM), the five-year project’s initial goals are the technical and economic validation of the RSOM technology, which the group believes could out-perform current optical or optoacoustic platforms and lead to a paradigm shift in dermatology imaging.

INNODERM coordinator Vasilis Ntziachristos of TUM, a lead developer of the RSOM method as well as director of the Institute of Biological and Medical Imaging (IBMI) at Helmholtz Zentrum München, has described it as being intended to fill the gap between optoacoustic microscopy and optoacoustic tomography. The technique is based on raster-scanning of a custom designed spherically focused ultrasound detector, able to operate across ultrawide detector bandwidths and deliver seamless epi-illumination of the volume being imaged.

As with other optoacoustic techniques, it is particularly suitable for imaging the morphology of tissues by using blood and melanin as inherent contrast generators, and in published research RSOM has successfully been used to image at a resolution of 4 to 40 microns, at depths of several millimeters.

This in turn makes RSOM a potentially valuable technique for the study of angiogenesis - the growth of new blood vessels which is one of the hallmarks of cancer. A recent paper by Ntziachristis and colleagues published in Neoplasia used RSOM to monitor tumor vascularization in a mouse model of melanin cancer, and did so in what the authors described as unprecedented high resolution.

Clinical prototype
The INNODERM project has been created to now develop the technique further and take it into clinical use. The stated objectives are the design of a scalable clinical RSOM prototype and pre-clinical validation of the technique, along with the creation of a suitable strategy for bringing RSOM to market.

Technology goals include using RSOM for high-resolution optical imaging at depths of around 5 mm, deeper than all-optical imaging methods can provide, along with improved high-contrast imaging of vascularization and angiogenesis.

If successful, INNODERM anticipates meeting a number of specific clinical needs in dermatology, in particular the ability to identify the differences between pre-cancerous tissue and carcinoma more easily, as well as readily distinguishing between skin irritation and allergic reactions. A light-weight portable scanner, suitable for use in a number of different clinical applications, would help to determine the precise origins of tumors and provide a more reliable assessment of their borders and depth.