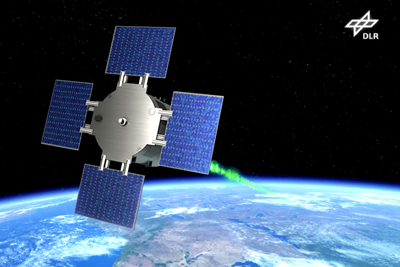 In addition to industrial CO2 emissions, agriculture also contributes significantly to climate change: above all methane (CH4) and nitrous oxide (N2O), which are released in large quantities due to livestock and fertilization.

But through the use of spectrometers carried on satellites orbiting the earth, space agencies can now precisely measure the amount of greenhouse gases in the atmosphere – by analyzing the light reflected from the earth’s surface.

To attain the highest possible resolution, grating and prism structures are combined: prisms detect blue light the most intensively, while a grating is the best method for bending red light.

Until now it has been almost impossible to combine these two structures to form an integrated system suitable for space deployment. The problem is that conventional adhesives are not an option because they absorb light, thereby distorting the measurement result. Normal glues are also sensitive to radiation and tend to age too fast.

Researchers at the Fraunhofer Institute for Applied Optics and Precision Engineering have developed a method that overcomes the inhospitable conditions in space and does not affect the performance of the integrated spectrometer. They are working together with the German Aerospace Center and the European Space Agency.

”We combine the optical elements with each other at the atomic scale, namely via oxygen bridges," said Dr. Gerhard Kalkowski, a scientist at the IOF. "In this way, we will provide the key for high-resolution systems made of prism-grating structures to also be able to be used in space in the future." 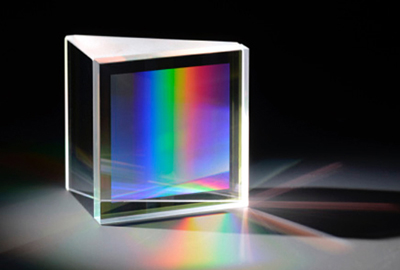 The technology, which is already known in the field of silicon wafers, is called hydrophilic bonding. In this process, oxygen and hydrogen atoms are bonded to the wafer’s surface. By pressing the surfaces together at elevated temperatures in a vacuum, rigid (covalent) oxygen bonds form between the two parts.

The researchers have now successfully transferred this technology to transparent silica glass. The oxygen bridges firmly connect the grating and prisms together, and the radiation in space cannot damage them. In addition, there is no intermediate layer, as in the case of adhesive, which would distort the measurements.

Among other things, the challenge was to accurately position the grating and prisms in relation to each other. The scientists thereby produce a mechanical edge on the grating. "The orientations deviate by only about an arc minute, as required – one arc minute is the 60th part of a degree angle," Kalkowski said.

Initial prototypes have successfully passed tests performed by the ESA. The researchers are presenting their technology at the Berlin Air Show, which runs from June 1 to 4, 2016 in Berlin. In a further development, the IOF scientists added that they are also are working on complex prism-grating structures.