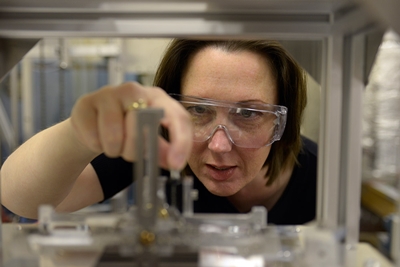 Scotland’s new chief scientific adviser (CSA) will be Professor Sheila Rowan, an expert in optical materials who is a leading member of the global team working on laser-based detection of gravitational waves.

John Swinney, Deputy First Minister for the devolved Scottish government, announced the appointment during a visit to the University of Glasgow, where Rowan is director of the Institute for Gravitational Research (IGR).

Rowan starts work in the post on June 13, as a three-days-per-week secondment to the Scottish Government for three years. She follows Muffy Calder, a computer scientist who is also a Glasgow academic and who was CSA between 2012 and 2015.

In a statement issued by the Scottish government, Rowan said: “I’m looking forward to working with ministers and officials to show the added value that science advice can bring to their work. I’m also keen to meet scientists across Scotland so that I can fully appreciate the potential impact of new developments in science, engineering and technology.”

LIGO involvement
After studying as both an undergraduate and a PhD student in Glasgow, Rowan held various positions split between Scotland and the Edward L. Ginzton Laboratory at Stanford University in California, which has strong expertise in photonic science and engineering.

She returned to Glasgow in 2003, becoming a professor of experimental physics three years later and carrying out research to develop optical materials for use in gravitational-wave detectors. That has included working on upgrades to the advanced laser interferometer gravitational-wave observatory (LIGO) facilities in the US.

LIGO hit the headlines in February after scientists there confirmed the first detection of gravitational waves – as predicted in Einstein’s theory of general relativity – something widely regarded as one of the most significant scientific breakthroughs in recent years.

At Glasgow, Rowan now leads a group of around 60 researchers developing detectors and signal analysis methods to search for gravitational waves both on the ground and from space. This week a European Space Agency-led team working on the planned laser interferometer space antenna (LISA) mission revealed that its pilot LISA Pathfinder mission - for which Glasgow researchers provided the optical system - had shown excellent performance after launching in late 2015. It suggests that the full-blown interferometer system would work as intended and be able to detect gravitational waves that are impossible to isolate on Earth.

Bay Area experience
In a post on the UK Science and Technology Facilities Council (STFC) web site, Rowan expanded: “As well as looking after the overall running of the IGR my personal research currently includes studies of the properties of the materials for the mirror substrates and suspensions of interferometric detectors and their optical coatings to try to ensure any noise coming from these parts of the instruments is minimized.”

Facilities like LIGO are able to detect gravitational waves by measuring tiny changes in the distance between mirrors that occur when space-time is stretched or compressed by a cosmic disturbance.

“If a gravitational wave passes by the detector, it will cause the positions of the mirrors to move,” Rowan wrote, adding that because so many other things can also make the mirrors move, a lot of work goes into isolating the mirrors from all other disturbances.

Describing her time in the US, Rowan added: “That was a fantastic experience…being in the Bay Area right through the peak of the telecoms and internet booms and seeing not only some really great science in the labs at Stanford, but also first-hand how that translated into spin-outs.”