New era of gravitational-wave astronomy with laser interferometers looks well under way as second black-hole collision is confirmed and third is investigated.

The two giant optical systems that make up the Laser Interferometer Gravitational-Wave Observatory (LIGO) in the US have detected a second collision between two black holes, suggesting the era of gravitational-wave astronomy is now well under way.

Scientists from the twin facilities, located in Louisiana and Washington, confirmed that the latest observation was made on Boxing Day 2015. Speaking at the American Astronomical Society’s annual meeting in San Diego, California, this week, they reported that the new signal lasted for a full second – five times longer than the first event.

That was because the two black holes involved in the latest collision were significantly smaller than those revealed to global acclaim in February. The LIGO team calculated that the Boxing Day event saw black holes 14 and 8 times the mass of our own sun coalesce, compared with the merger of 36- and 29-solar masses in the first event.

Third event detected
The latest cosmic collision created a 21-solar mass black hole, with energy equivalent to the mass of our sun released in the form of gravitational waves of sufficient power that their deformation of space-time could be detected on Earth more than a billion years later.

LIGO says that another “likely” gravitational-wave has also been identified, with the October 2015 detection believed to have been caused by another collision between two black holes. It means that in its first period of operation – before it closed in January for an upgrade that will provide even greater sensitivity thanks to better detectors - LIGO was able to “see” cosmic events at a rate of around one every two months.

“We can now start to estimate the rate of black hole coalescences in the universe based not on theory, but on real observations,” announced the team.

Officially reporting their observation in the journal Physical Review Letters, the team explained that the Boxing Day 2015 signal recorded the final 27 orbits between the two bodies – which actually took place around 1.4 billion years ago.

LIGO’s Gabriela Gonzalez said: “Because of their lighter masses compared to the first detection, they spent more time - about one second - in the sensitive band of the detectors. It is a promising start to mapping the populations of black holes in our universe.” 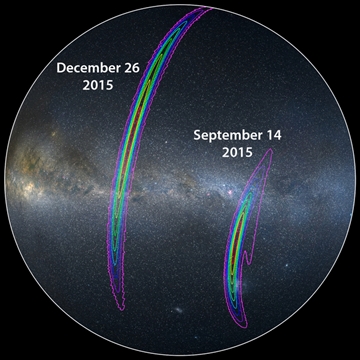 Virgo to provide triangulation
One thing that the two LIGO systems cannot currently work out is exactly where in the universe the collision took place.

The latest signal was picked up by the Louisiana and Washington interferometers only a millisecond apart, whereas the delay observed in the September 2015 collision 7 milliseconds gave astronomers a much stronger steer on the direction from which the gravitational waves arrived. But neither event can be mapped precisely at present.

However, another giant interferometer – the Virgo facility built near Pisa in Italy – should soon be operational, giving the scientists a third location to detect the same waves as they pass by Earth, and the ability to triangulate their source with far greater precision.

Speaking on behalf of the Virgo Collaboration Fulvio Ricci, a physicist at Istituto Nazionale di Fisica Nucleare (INFN) and professor at Sapienza University of Rome, said: "In the near future, Virgo will join a growing network of gravitational-wave detectors, which work together with ground-based telescopes that follow-up on the signals. The three interferometers together will permit a far better localization in the sky of the signals."

Next LIGO run this fall
Aside from reaffirming Einstein’s theory of general relativity, the second (and likely third) confirmation of gravity-wave events detected by giant laser interferometers on Earth suggests that the technology has indeed opened a new window on the universe.

Similar systems are also planned for deployment in space in the coming decades, and these should be capable of detecting collisions and other events that cannot be observed on Earth because of interfering signals.

The LIGO team concluded in their PRL paper: “These recent detections in Advanced LIGO’s first observing period have revealed a population of binary black holes that heralds the opening of the field of gravitational-wave astronomy.”

The facility’s next data-taking run is scheduled to begin later this year, with LIGO saying that improvements in detector sensitivity should allow the facilities to observe twice as much of the universe as the first run. “The Virgo detector is expected to join in the latter half of the upcoming observing run,” the team added.