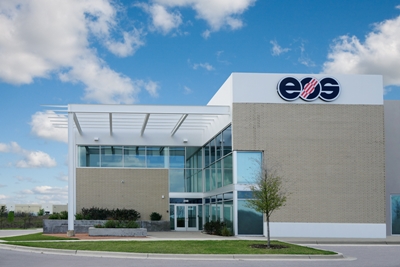 The Pflugerville site will initially employ 30 people, although EOS expects that figure to double within just two years as demand for the systems proliferates.

Those employees will be largely focused on applications and customer interaction, with the new site featuring an “innovations laboratory” where custom tools and processes for fabricating specific parts will be developed.

US operations
Noting that EOS has now sold more than 2100 systems globally, the company’s founder and CEO Hans Langer said: “Our Pflugerville investment is a direct reflection of our ongoing success. Additive manufacturing is rapidly becoming a more widely accepted solution to complex manufacturing requirements across a broad spectrum of industries.”

EOS says that North America represented $100 million of its 2015 annual sales, and the company is already looking to build further on its growing US presence.

It has established a subsidiary to produce and blend polymer materials for both EOS and other powder-based additive manufacturing technologies in Temple, Texas, along with a regional technical center in Novi, Michigan.

“Future plans to further expand within the US include the Boston and Northern California regions,” added EOS.

The ribbon-cutting ceremony in Pflugerville follows last month’s launch of an aerospace-focused facility in Munich involving EOS alongside big-hitters Safran and Airbus, while the German firm has also been part of a pioneering project to make individualized 3D-printed tracheal splints to treat children suffering from the congenital breathing condition tracheobronchomalasia (TBM).

Wohlers reports more rapid growth
Growing demand for the lasers that sit at the heart of these additive manufacturing systems was evident in IPG Photonics’ earnings call last week, with the fiber laser firm’s CEO Valentin Gapontsev saying that customers were “moving up the power scale” – indicating a desire to increase 3D manufacturing throughput.

In their latest report on the fast-growing market, analysts at Wohlers estimated that the global 3D printing industry – including all products and services – grew 26 per cent in 2015, to a value of just under $5.2 billion.

That total includes all forms of additive manufacturing technology, many of which do not use lasers at all. Wohlers estimates that more than 278,000 “desktop” style 3D printers, each costing less than $5000, were sold last year.

While nobody disputes the rapid growth of the additive manufacturing sector, whether laser-enabled or not, a note of caution was sounded at this year's SPIE Photonics West panel session on the topic. During that session Rebecca Taylor, senior VP at the US National Center for Manufacturing Sciences, warned on the twin issues of IP theft and cybersecurity facing the industry:

“Remember that most production equipment has been made to be productive rather than secure," she said. "So when we are looking at all these great opportunities for 3D printing, cybersecurity should be at the forefront of our thinking. I’m sorry to bring you down a bit after these great technology descriptions but this is a mission-critical issue.”