Speckle-variance technique is able to distinguish between blood vessels of malignant and benign skin lesions. 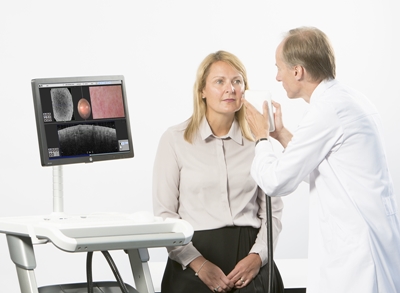 Researchers in New York have shown that a variation of optical coherence tomography (OCT) is able to tell melanomas apart from other skin lesions, by imaging the patterns of blood vessels that surround them.

The small, early-stage study suggests that speckle-variance (sv) OCT could become a useful clinical tool for quickly identifying the most dangerous form of skin cancer, although a larger clinical trial of the technique will be needed to prove its utility first.

Writing in the open access journal Dermatology Online, Orit Markowitz and colleagues looked at two pairs of malignant and benign lesions that are typically difficult to differentiate: a basal cell carcinoma versus a sebaceous hyperplasia; and a melanoma-in-situ versus pigmented actinic keratosis.

They found that the blood vessels feeding the melanoma were thin and irregular, spanning its entire en face field. In contrast, the benign sebaceous hyperplasia showed well-organized, thick and regular vessels. The pigmented actinic keratosis lesion, a type that can look very similar to melanoma, showed “minimal vascular irregularity” compared with the malignancy.

“These observations suggest the clinical value of this innovative method to help characterize both pigmented and non-pigmented early skin cancers,” concluded the New York team. “Our findings from these four cases should be confirmed in future studies with a larger series to verify these conclusions.”

Michelson OCT kit
Markowitz and her colleagues, who are based at the State University of New York (SUNY) Downstate Medical Center in Brooklyn, the New York Harbor Healthcare System, and the Mount Sinai Medical Center, used OCT kit developed by the UK firm Michelson Diagnostics.

Michelson CTO Jon Holmes described the speed of the technique, telling optics.org: "Scanning a lesion takes about 20 seconds. The interpretation is usually done then and there by the clinician and takes a few moments.

"It is relatively straightforward for the clinician to identify non-melanoma skin cancer ‘nests’ in the OCT images, and this has been well documented and validated in two multi-center clinical trials.".

Although the application of OCT in skin cancer has thus far focused on non-melanoma lesions (Michelson's own records suggest that more than 20,000 patients have now been scanned at 25 centers), Holmes said that other research teams have collected more than 100 melanoma scans, and would be publishing their results in due course.

'Big step'
Holmes explains that melanomas are much more tricky to identify, because standard OCT images do not show much in the way of useful features.

But with svOCT, which Holmes refers to as 'dynamic OCT', the technique has revealed the angiogenesis that occurs in melanomas. "This is a big step!" he said. "This could be useful in diagnosing melanomas and/or identifying whether a melanoma has progressed to the point where it is spread around the body and producing metastases. Further work will be needed to validate these ideas."

For imaging the microvasculature of organisms, svOCT relies on fluctuations in speckle caused by the movement of blood cells. Contrast is provided by the different scattering effects created by fluid and solid components in living tissue, and allows a picture of blood vessels just beneath the surface of the skin to be created in real time.

Other clinical uses could include scanning of pre-cancerous tissue, as well as inflammatory conditions like rosacea and scleroderma, wound-healing, scar treatment and psoriasis. "We also believe that the technique will be useful to help optimize the laser treatments to port wine stains, hemangiomas, spider veins and so on," Holmes added.

One of the five physicists and engineers who originally founded Michelson Diagnostics in 2006, he recently stepped up to become CEO after previous incumbent Andy Hill resigned.

Hill had joined the firm just over a year earlier, shortly before Michelson Diagnostics closed a series B funding round worth £2.5 million, with Smith & Nephew and Kent County Council among the investors.

Since then, the company has commercialized the VivoSight scanner, which has gained CE Mark approval in Europe and is now being sold via private healthcare reimbursement schemes in Germany. In the US, the system currently has 510(k) clearance from the Food & Drug Administration (FDA), with various clinical studies said to be under way.