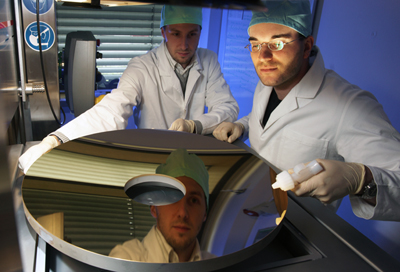 The coating of mirrors is carried out with atomic precision at Fraunhofer IOF.

In the “Beyond EUV” project, the Fraunhofer Institutes for Laser Technology ILT in Aachen and for Applied Optics and Precision Engineering IOF in Jena are together developing photonics-based technologies for the manufacture of a new generation of microchips. The systems are based on EUV (extreme ultraviolet) radiation at a wavelength of 6.7nm – half the wavelength of conventional EUV systems.

The resulting manufactured structures are barely thicker than single atoms and, say the scientists, they will enable the production of “extremely integrated” circuits for such items as wearables or mind-controlled prosthetic limbs.

The integration density of electronic circuits is continues to intensify – growth primarily enabled by advances in optical technologies in conjunction with progress in materials science. The Fraunhofer scientists say that although there are fundamental physical limits, the potential of these developments is far from exhausted. A combined team from Jena and Aachen is focusing on the next-generation of systems for producing even smaller structures.

The team notes, “A key constraint for the lithographic production of smaller structures is the wavelength of the light used. In the 1970s the UV light from a mercury vapor lamp was sufficient; the 1990s saw the emergence of excimer lasers with wavelengths of 193nm. Today, the semiconductor industry combines radiation sources with refined methods of optical lithography to manufacture structures as small as 14nm across."

Having played a leading part in developing EUV technology, which typically possesses a wavelength of 13.5nm, generated by evaporating a droplet of tin with a high-power laser, scientists at Fraunhofer ILT are now focused on the next step: technology that uses radiation with a wavelength of around 6.7nm. Instead of tin, they are working with targets made of gadolinium or terbium alloys, as these generate correspondingly shorter wavelengths. 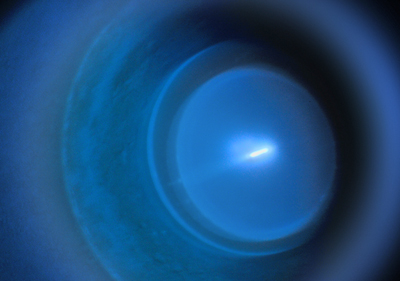 Teams from the two Fraunhofer institutes are developing an optical system with which to characterize the radiation source. This system enables them to measure light output to a high degree of spatial and spectral resolution. The output power of the radiation source is now high enough to carry out trials on new mirror coatings or light-sensitive varnishes (resists). Development work on the radiation source is ongoing to achieve the necessary power scaling.

Dr Klaus Bergmann, from Fraunhofer ILT, told optics.org, “Tin is currently used as intense radiator for EUV lithography at 13.5nm. The promising smaller wavelength is 6.7nm, since for this wavelength new multilayer mirrors with high reflectivity are possible. Since there is no final specification for the wavelength yet, we also use the expression '6.x nm'.

"The sources for chip production at 13.5nm are currently laser-induced plasmas, where a high intensity pulsed laser is focused onto a tin droplet. Intense emitters are also known with gadolinium or terbium. The future specification on source power for 6.x nm may not differ much from the 13.5nm power requirement, i.e. several hundred watts of 13.5nm inband radiation being fed into the optical system.”

It is laborious and expensive to generate EUV radiation, and consequently every percentage point of reflectivity matters. In the case of mirrors for 13 nm radiation, it has been possible to achieve a reflectivity of around 65% using alternating films of silicon and molybdenum. When it comes to mirrors for 6.7 nm radiation, experts from Fraunhofer IOF in Jena have developed special systems using lanthanum and boron compounds. Here, too, they are battling to reach the theoretical limit of around 70%. 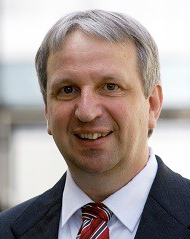 Considering the possible advantages of features produced by the shorter EUV wavelengths, Dr Bergmann said, “the theoretical limit for the reflectivity of the 6.x nm multilayer mirrors is higher than that of the 13.5nm mirrors. Thus a more efficient optical system is expected. Also, by using the shorter wavelength, the requirement for the numerical aperture of the optical system is more relaxed."

The Fraunhofer institutes, which have been working on the Beyond EUV project since 2014, are now collaborating with industrial partners. The project runs to the end of 2016, with the aim of developing further key components for 6.7nm wavelength technology.

Dr Bergmann concluded, “We are working on the know-how on making future mirrors at 6.x nm and on technical solutions for the source. We are also working on key patents in this field and looking for future collaboration with industrial partners.”