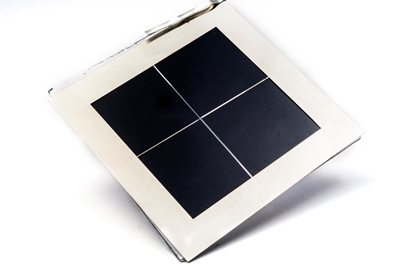 Progress with new perovskite-based solar modules at the Belgian electronics research center imec suggests that the emerging technology could be useful in future photovoltaic windows.

In partnership with the Solliance research consortium, the imec team says it has developed the first semi-transparent perovskite PV module, achieving a power conversion efficiency of “up to” 12 per cent.

And perhaps more significantly, those modules have also been combined with silicon cells, delivering an “unprecedented” 20.2 per cent power conversion efficiency for a stacked solar module featuring the two materials. The efficiency figures are from internal tests, with samples currently at the Fraunhofer Institute for Solar Energy Systems (ISE) awaiting independent verification.

Exciting potential
imec adds that while its 4 cm2 standalone perovskite modules showed a conversion efficiency of 12 per cent, that figure fell to 10 per cent with larger 16 cm2 devices.

Once again, the higher efficiency figure of 20.2 per cent was found with the smaller 4 cm2 area module – falling to 17.2 per cent with the 16 cm2 device.

Tom Aernouts, manager of thin film PV development at the Leuven site said: “We are proud about these results as they show we have excellent control over the performance as well as the upscaling capabilities of this technology.”

He says that future work will concentrate on increasing module sizes and further optimization of the perovskite cell technology. The imec researchers point out that they have also demonstrated a higher conversion efficiency figure of 22 per cent for a stacked silicon-perovskite device, although that was with a tiny, millimeter-scale, cell and more realistic sizes must be produced for genuine advancement of the technology towards commercial deployment.

More details could be revealed when imec and Solliance representatives discuss the latest results at two major solar energy conferences coming up next month - the IEEE PVSEC event in Portland, US, and the EU-PVSEC in Munich, Germany. 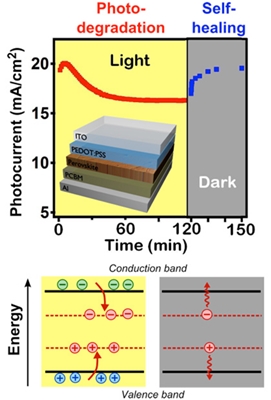 Photodegradation now better understood
In a related development, a research team in the US says that it has worked out why it is that the performance of perovskite PV cells degrades on exposure to light – and how the material can be “healed” by simply by leaving the cells in the cold and dark.

Writing in the open-access journal Nature Communications, Aditya Mohite from Los Alamos National Laboratory (LANL) and colleagues suggest that the drop in photocurrent produced by the thin-film devices results from the formation of light-activated metastable “trap” states.

After on a series of spectroscopic experiments, they concluded that, over time, trapped charge carriers accumulate in the perovskite cells, meaning that they become less and less effective at converting sunlight into electrical current.

However, the good news is that placing the cells in the dark for a few minutes allowed the devices to recover “pristine” performance. The degradation and healing mechanisms are also strongly temperature-dependent, and cooling the cells seems to both speed the recovery and slow the initial degradation.

LANL researcher Jean-Christophe Blancon said in a release from the New Mexico lab: “Our understanding of the organic cation [CH3NH3, used in the organometallic perovskite material] is still primitive, but our work demonstrates its utmost importance in the photo-stability of perovskite devices and calls for further investigations in the future.”

Challenges remain
While perovskite-based cells have shown remarkable conversion efficiencies for such an immature solar cell technology, and could in principle be fabricated with extremely cheap processes, their overall stability is a challenge that needs to be addressed before such devices are regarded as sufficiently robust and effective to begin appearing on roofs or solar farms.

Among the outstanding issues are scaling the cell and module area to commercially useful sizes while maintaining good stability and efficiency performance. The best-performing organometallic perovskite structures at the moment are also based around lead metal – raising some concerns over environmental credentials.

imec's Aernouts told optics.org that the although the LANL research provides a better understanding of perovskite material behavior in general, the rate of degradation and subsequent self-healing depends on the specific device architecture used.

"We have other architectures that do not show this type of photo-degradation but are stable over much longer times," he said. "What we are mostly working on is to create full architectures with the right contact and electrode materials that have stable performance, since the high sensitivity of the perovskite material itself to humidity can be overcome by applying the correct packaging."

Aernouts adds that the key issue the imec team is working to overcome is avoiding detrimental interface reactions, in order to realize long-lived perovskite modules. "It is not the so-claimed intrinsic instability of the perovskite itself that's the limiting factor," he said.