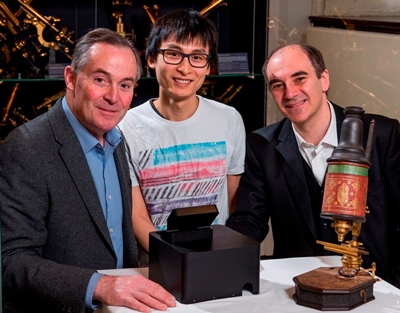 A new UK university spin-out company says that it will “democratize” the use of super-resolution microscopy, with a desktop-style system no larger than a shoebox.

Oxford Nanoimaging (ONI), which was incorporated in February and has just raised £1.2 million in seed funding, says that its “Nanoimager” product will offer state-of-the-art imaging at a fraction of the size and half the cost of conventional super-resolution systems.

While the various optical approaches that are capable of beating Ernst Abbe’s diffraction limit have gained global notoriety since the award of the 2014 Nobel prize in chemistry to three super-resolution pioneers, they generally rely on expensive, sensitive equipment restricted to specialist laboratories.

But ONI’s CEO Jeremy Warren and Achillefs Kapanidis, the Oxford professor upon whose research the Nanoimager kit is based, say that the cutting-edge technique will soon become much more readily available.

Kapanidis said: “The new microscope will take single-molecule imaging out of physics labs and centralized facilities, and into the hands of the chemist, the biologist, the biotechnologist.

“It is not only an excellent instrument for super-resolution imaging, but also a versatile, user-friendly toolbox that will help new users innovate with single molecules as their new currency.”

"Democratizing super-res"
The multidisciplinary Kapanidis biological physics research group that developed the Nanoimager technology is part of the Clarendon Laboratory at Oxford. The equipment is based on the phenomenon of fluorescence resonance energy transfer (FRET). Also referred to as Förster resonance energy transfer, it is similar in principle to the stimulated emission depletion microscopy (STED) technique pioneered by Stefan Hell, one of the 2014 Nobel laureates.

FRET microscopy works via the exchange of energy between donor and acceptor molecules in close proximity. The extent to which that energy is transferred can then be analyzed to calculate the distance between the donor and acceptor.

When the donor and acceptor elements are part of larger macromolecules such as proteins or nucleic acids, FRET can be used to elucidate structural information about the macromolecule and the way in which it folds.

Warren said: “With Oxford Nanoimaging, we aim to democratize the use of super-resolution microscopy. Scientists who don’t have a lab equipped with specialist physics kit and a large budget can still access the information this very powerful technology provides."

He told optics.org that the new kit was based around commercially available lasers, adding: "With Nanoimager the concept of a single-molecule microscope has been completely revised. The devices were designed from the bottom up with optical components machined into place and so free from alignment issues, rather than screwed to a bread board."

Warren also said that with eight years of research having already gone into the Nanoimager development within Kapanidis' research group, ONI was able to launch as a company with a finished product and orders in place.

"We are a little unusual as a start-up as we have a finished product and a team in place," he said. "We are approaching 20 [employees] and will be more than that by year end. “We anticipate that by our second year, 90 per cent of sales will be to groups outside of the UK, creating a strong exporting business.”

Tech specs
While the kit's imaging precision will depend on the specifics of a given experiment, Warren claimed: "In a single molecule experiment, for example with proteins on a surface, we can resolve individual molecules that are around 250 nm apart and locate their position with 10 nm accuracy."

Temporal resolution can be varied between 100 Hz (full frame) and 5 kHz (2% frame height), depending on the area that a user wants to record. For super-resolution imaging of fixed cells where temporal resolution is not the key parameter (typical exposure time is 30 ms per frame, acquiring for 10,000 frames), the Nanoimager uses the 'dSTORM' technique to achieve a typical lateral resolution of 10 nm and an axial resolution of around 50 nm.

Initially, Warren expects to be selling the kit to customers who already know about the capabilities of FRET and other super-resolution approaches, but that could soon change to include biologists and life scientists who want access to cutting-edge research tools in a variety of applications (for example drug delivery and nuclear organization), but who do not have the capacity to develop microscopes themselves.

"Life scientists are accustomed to looking at fluorescence images of cells but may not have yet realized the full potential of fluorescence imaging of single molecules, which the Nanoimager offers," said the CEO.

Start-up funding
Backing the start-up so far are Oxford Sciences Innovation (OSI) and Oxford Technology Management, along with local business angels Barnaby Martin and George Robinson, the latter a hedge-fund manager who is also on the board of directors at Oxford Photovoltaics.

The £300 million OSI fund was set up just a year ago, with the specific aim of commercializing Oxford University’s research in mathematics, physical and life sciences, and medicine. It is backed by Invesco Asset Management, The Wellcome Trust, and Woodford Investment Management, among others.

Warren, who was previously CEO at the nanoparticle tracking analysis technology developer NanoSight - acquired by Malvern Instruments in 2013 - has joined forces with Kapanidis and PhD student Bo Jing to found ONI. With orders for the Nanoimager already in the pipeline, he expects the company to attract follow-on funding for growth "relatively soon".

Kapanidis said of the Nanoimager, which measures just 21 cm x 21 cm x 15 cm: “It will unlock the users’ imagination and creativity. I wish I had this when I was a graduate student.”