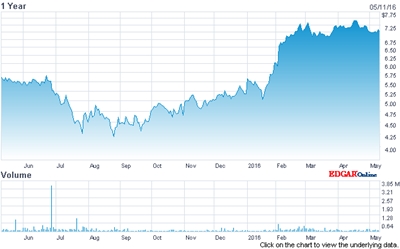 Executives at the laser micromachining system developer Electro Scientific Industries (ESI) say that the company has taken a “big step forward” in its turnaround strategy, with annual sales up for the first time in four years.

CEO Ed Grady and his team reported sales of $51.5 million for the closing quarter of ESI’s fiscal year 2016, which ended on April 2. That represented a 37 per cent increase on the same period in 2015.

The sales figure was enough to push the Portland, Oregon, company into the black, its quarterly net income of $1.3 million comparing with a loss of $22.9 million this time last year - around the same time that KLA-Tencor and Hoya Micromask veteran Grady replaced former CEO Nick Konidaris and set about a comprehensive restructuring.

Although ESI still posted a loss of $12.3 million for the full fiscal year, a 28 per cent increase in annual systems sales to $143 million helped the company recover somewhat from the loss of $43.6 million it posted last year.

Laser development key
While the change in fortunes is partly due to site consolidation and the acquisition of China-based laser subsidiary Topwin Optoelectronics, Grady said that a key factor was the company’s internal laser development activity through the Eolite Systems division that ESI acquired back in 2012.

Grady pointed out that the company had posted its largest GemStone bookings to date in the most recent quarter, telling an investor conference call: “GemStone has become one of our most successful new products in recent years. It is winning on both industry-leading performance and cost of ownership, enabled by our internally developed laser.”

Another of ESI’s newer laser platforms is the “nViant”, which is a drilling system based on a carbon dioxide source. “Customer interest in nViant has exceeded our initial projections,” said Grady.

As a result of that and demand for other new laser systems like the low-cost Jade and Garnet products offered through the Topwin subsidiary, quarterly bookings were also up strongly over the same period last year, at $56 million.

Turnaround ‘on track’
Summarizing the fiscal 2016 performance, ESI’s CFO Paul Oldham said: “Our fourth quarter was a great finish to a year in which we took a big step forward in our turnaround strategy.”

And despite expectations of some near-term volatility in end markets such as consumer electronics, he added: “As we look forward we are starting fiscal 2017 with a strong backlog and exciting new products, and we believe our turnaround strategy is broadly on track.”

He and Grady expect to post revenues of between $48 million and $53 million for the opening quarter of ESI’s fiscal 2017, alongside another modest profit.

• ESI’s stock price on the Nasdaq exchange appeared largely unaffected by the latest results and somewhat uncertain outlook, with shares in the company trading at around $7 once markets opened following the update.

However, that does represent a significant recovery from the long-term low of $4.21 that ESI had slipped to in summer 2015. The company’s market capitalization currently stands at around $220 million.