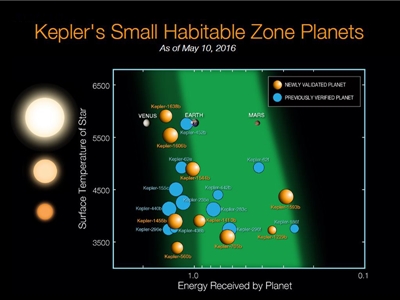 Optical data captured by NASA’s Kepler space telescope has been used to identify another nine Earth-like exoplanets orbiting stars in what astronomers call the “habitable zone” – where surface temperatures would support the formation of liquid water.

Scientists from the Kepler mission have just published their findings, which are based on a new statistical analysis of the data, in The Astrophysical Journal. Looking at the space telescope’s July 2015 planet candidate catalog of more than 4300 potential extra-terrestrial worlds, the analysis suggests that 1284 are almost certain to be exoplanets.

A further 1327 candidates are probably also exoplanets, but do not quite meet the 99 per cent certainty threshold demanded, while the remaining 707 from the dataset are probably not planets at all.

Nine new ‘Goldilocks’ exoplanets
Of the newly validated batch, some 550 exoplanets are thought to be made of rock and of a similar size to Earth. And out of those 550, nine orbit their host stars in the so-called “Goldilocks” zone, where water could be present in liquid form.

“With the addition of these nine, 21 exoplanets now are known to be members of this exclusive group,” NASA said.

Paul Hertz, the director of NASA’s astrophysics division, added: "Before the Kepler space telescope launched, we did not know whether exoplanets were rare or common in the galaxy. Thanks to Kepler and the research community, we now know there could be more planets than stars.”

While the Kepler mission only collected data from a small patch of the sky – near the constellations of Lyra and Cygnus – for four years, NASA says that the data set comprised 150,000 stars and will continue to be analyzed for decades to come.

TESS and JWST missions on Edinburgh agenda
The “K2” follow-up mission to Kepler is extending the exoplanet survey to other parts of the sky, while the forthcoming Transiting Exoplanet Survey Satellite (TESS) will apply the same basic method – monitoring the slight dip in a star’s brightness as seen from Earth as a planet orbits – to monitor another 200,000 stars over a two-year period, with a focus on finding Earth-like worlds.

Like the James Webb Space Telescope (JWST), TESS is currently scheduled for launch in 2018, and both projects will feature heavily at the forthcoming SPIE Astronomical Telescopes and Instrumentation conference taking place in Edinburgh, UK, next month. 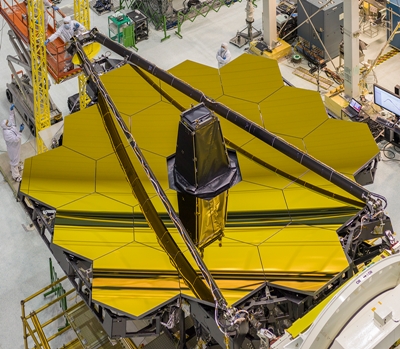 NASA’s engineers at the Goddard Space Flight Center are currently assembling JWST’s mirrors and optical systems, ahead of an anticipated delivery to the Johnson Space Center next year before final tests, full integration and launch.

In the past couple of weeks, the 18 hexagonal, gold-coated segments that make up JWST’s primary mirror have been revealed within the Goddard clean room, as the engineering team puts the finishing touches to what will be the largest mirror and most powerful telescope in space.

Assuming a successful test period and subsequent launch, scientists will use JWST to capture images and spectra of the earliest galaxies to form, as well as investigating star-forming nebulae, exoplanets and Earth’s own Solar System in unprecedented detail.