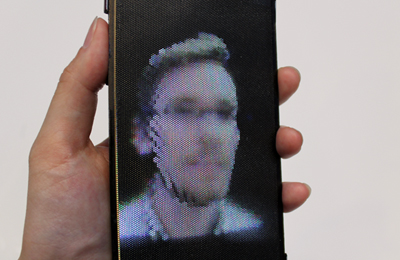 Researchers at the Human Media Lab at Queen’s University, Kingston, have developed the world’s first holographic flexible smartphone. The device, dubbed HoloFlex, is capable of rendering 3D images with motion parallax and stereoscopy to multiple simultaneous users without head tracking or glasses.

“HoloFlex offers a completely new way of interacting with your smartphone. It allows for glasses-free interactions with 3D video and images in a way that does not encumber the user,” said Dr. Roel Vertegaal, from the development team, who is Professor of Human-Computer Interaction the university's School of Computing. The HoloFlex features a 1920 x 1080-pixel high-definition Flexible Organic Light Emitting Diode (FOLED) touchscreen display.

Images are rendered into 12-pixel wide circular blocks rendering the full view of the 3D object from a particular viewpoint. These pixel blocks project through a 3D printed flexible microlens array consisting of over 16,000 fisheye lenses. The resulting 160 x 104 pixel resolution image allows users to inspect a 3D object from any angle simply by rotating the phone.

Building on the success of the ReFlex flexible smartphone, HoloFlex is also equipped with a bend sensor, which allows for the user to bend the phone as a means of moving objects along the z-axis of the display. HoloFlex is powered by a 1.5 GHz Qualcomm Snapdragon 810 processor and 2 GB of memory. 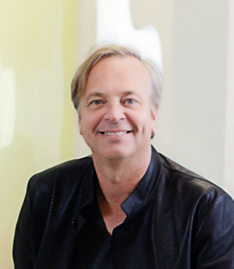 The board runs Android 5.1 software and includes an Adreno 430 GPU supporting OpenGL 3.1. Dr. Vertegaal said he anticpates a number of applications for the new functionality of the HoloFlex technology. “A first application is the use of bend gestures for Z-Input to facilitate the editing of 3D models, for example, when 3D printing,” he commented.

Using the touchscreen, a user can swipe to manipulate objects in the x and y axes, while squeezing the display to move objects along the z-axis. Due to the wide view angle, multiple users can examine a 3D model simultaneously from different points of view.

“By employing a depth camera, users can also perform holographic video conferences with one another,” he said. “When bending the display, users literally pop out of the screen and can even look around each other, with their faces rendered correctly from any angle to any onlooker”.

HoloFlex also can be used for holographic gaming. In a game such as Angry Birds, for example, users would be able to bend the side of the display to pull the elastic rubber band that propels the bird. When the bird flies across the screen, the holographic display makes the bird literally pop out of the screen in the third dimension.

Queen’s researchers this week unveiled HoloFlex to the public in San Jose, California at ACM CHI 2016, a leading conference in Human-Computer Interaction. The research, published in Extended Abstracts from this week's conference, has been support by Immersion Canada Inc. and the Natural Sciences and Engineering Research Council of Canada.

About the Human Media Lab

The following video shows the Holoflex handset in action: