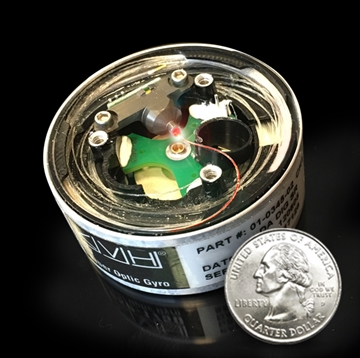 KVH Industries, the Rhode Island company that specializes in sensor technologies, says it is now developing a new product based around a fiber-optic gyroscope (FOG) for self-driving cars.

FOGs are expected to be at the heart of inertial sensors that determine the movement of a driverless car through a curve. According to KVH these inertial measurement units (IMUs), which combine FOGs with accelerometer components, are able to provide highly accurate angular rate and acceleration data to precisely track the position and orientation of the car - even when GPS is unavailable – to keep the vehicle on its intended course.

KVH has already shipped tens of thousands of FOG units for other applications, primarily in military and defense but increasingly in commercial deployments for unmanned aerial vehicles (UAVs) and robotics.

CEO Martin Kits van Heyningen said: “Extremely precise heading based on FOG technology is absolutely essential for autonomous vehicle performance. This is something we learned from having been involved with more than a dozen driverless car development programs over the years.”

He added: “What we are seeing now is that each driverless vehicle concept in development around the world is being designed in a unique way. With so many different possibilities, developers can accelerate their progress by working with a proven technology such as KVH’s FOGs and FOG-based IMUs and leveraging our experience to ensure their success.”

Autonomous cars and photonics
To assist with that, KVH has also released a developer kit incorporating user interface software and all the components needed to immediately connect one of its FOGs or FOG-based IMUs to a computer so that the unit can be configured, analyzed, and tested.

“The kit is designed to help engineers get up and running in minutes, making it easier to run diagnostics and accelerate their system development,” said Roger Ward, KVH’s director of FOG product development, in a company announcement.

Driverless cars represent one of the fastest areas of autonomous-systems development, and optics and photonics technologies look set to play a key role.

Most obviously that will be in the form of multiple cameras, but major car firms including Ford and Volvo are also testing compact new lidar modules designed to provide the car with additional information about its immediate surroundings and any obstacles. Other novel ideas such as low-cost infrared depth sensors are also emerging.

KVH points to recent developments such as the news that the US National Highway Traffic Safety Administration (NHTSA) is soon to publish an updated policy on automated vehicles as evidence that the era of driverless cars is coming quickly into view.

Rapid developments
In a policy statement earlier this year acknowledging that the technological progress being made required it to be flexible and adaptable, the NHTSA stated: “The rapid development of emerging automation technologies means that partially and fully automated vehicles are nearing the point at which widespread deployment is feasible.”

It added: “Within six months, NHTSA will propose best-practice guidance to industry on establishing principles of safe operation for fully autonomous vehicles.” Meanwhile the NHTSA is set to host its first public meeting to discuss the safe operation of automated vehicles in Washington, DC, this week.

According to KVH, FOGs and FOG-based IMUs will become key parts of the sensor mechanisms essential for accurate autonomous car performance.

Jeff Brunner, the company’s VP of FOG operations, noted: “We have successfully produced more than 90,000 fiber-optic gyros for an extensive range of unmanned applications, in part because of our ability to tailor size, performance, and cost to meet different design needs.

“Controlling the entire FOG design and manufacturing process gives us that advantage, and makes it possible to produce a low-cost sensor when driverless cars enter full-scale production.”