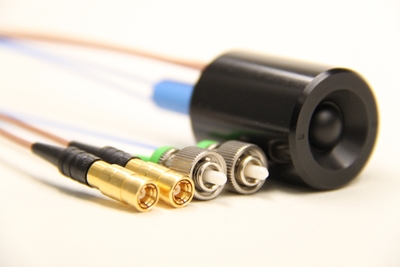 Engineers at the Fraunhofer Heinrich Hertz Institut (HHI) in Berlin say that their novel terahertz metrology system based around standard optical components could dramatically reduce the cost of the emerging technology.

Prototype versions of the sensor heads are said to be finding applications in plastic pipe production already, and the setup will feature at the giant Hannover Messe industrial technology trade show later this month.

Although terahertz scanners have long been regarded as having huge potential in applications such as airport security, this region of the electromagnetic spectrum remains extremely difficult to access with compact optoelectronic components and only a handful of commercial terahertz technologies have become available so far.

What Thorsten Göbel’s HHI team is now claiming to have done is develop a terahertz sensor head using standard, low-cost optoelectronic components. The unit is based around a semiconductor device that converts 1500 nm light emitted by the kind of lasers widely used in optical telecommunications into nanosecond pulses at terahertz wavelengths.

In existing terahertz systems 800 nm sources are usually used, but HHI says that this wavelength is prohibitively expensive and insufficiently robust for industrial use.

Terahertz transceiver
The critical development is a new integrated transceiver component, which replaces the separate transmitter and receiver elements that are typically used in terahertz systems and which require precise alignment.

“Now it is possible to use a single optical lens that focuses on the object, which allows for a flexible operating distance,” HHI says, adding that the transceiver unit fits into a sensor head only 25 mm in diameter and 35 mm long.

Elements of that technology were presented during the SPIE Photonics West “OPTO” symposium in San Francisco earlier this year. The HHI team described its hybrid polymer/indium phosphide dual-DBR laser, which acts as an optical source for heterodyne generation and detection of terahertz signals.

“The device consists of an active InP chip as an active gain element, coupled to a polymer chip with thermo-optically tunable phase shifters and Bragg gratings,” they wrote in their presentation abstract. “Mode-hop-free tuning of 1.1 THz has been achieved on the single DBR lasers. The usability of such sources for heterodyne cw-THz generation has been demonstrated in a coherent cw-THz setup.”

Plastic pipe metrology
The HHI team says that its prototype system has been used by manufacturers of plastic pipes “for some time now”, deployed on the production line to monitor the thickness of the pipe walls. That’s important because if the walls are too thin the pipe becomes unstable, while thick walls represent a waste of resources.

Ultrasound systems are more typically used for this application, but water is required as a coupling medium to transmit the ultrasonic waves – the same reason that gel is used in clinical ultrasound imaging.

This means that pipes sometimes heated to temperatures of 250°C must be pulled through a water tank for ultrasound inspection – with the terahertz setup offering a much more convenient and versatile option.

Another potential application is checking paints and coatings on carbon fiber reinforced composite materials, which cannot be tested with conventional electrical equipment relying on metallic substrates. “The need for a reliable measurement process is enormous, because the market for composite materials is growing in the automotive, aircraft and wind energy industries,” said Göbel.

He and the HHI research team admit that although the new terahertz technology is constructed from inexpensive standard optical components, it is still more expensive than rival ultrasound systems.

“However, the price will drop in the future when volume production starts picking up,” Göbel predicts.

• The HHI team will be showcasing the terahertz system at stand C16-C22 in Hall 2 at Hannover Messe from 25-29 April.