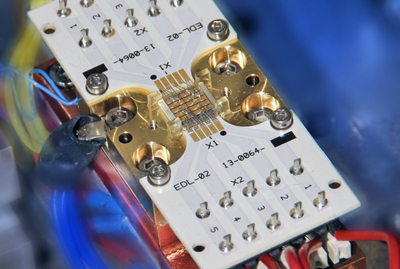 The pan-European Brilliant Industrial Diode Lasers (BRIDLE) project has concluded after three-and-a-half years of intense research activities. The €4.2 million BRIDLE was enabled by €3 million funding from the European Commission within the Seventh framework program. The seven project partners, coordinated by DILAS Diodelaser, Germany, completed their work at the end of February 2016.

The seven BRIDLE project partners, listed here, are based across Europe. Among its diverse objectives, BRIDLE researchers achieved a significant increase in the achievable brilliance from direct diode laser systems, based on new approaches to diode laser and coherent beam combining (CBC). The group has just published a report on the key achievements, which are described below:

Addressable diodes with rear and front facet access for CBC

The design and technological development of diode lasers was conducted by three BRIDLE partners. First, the Ferdinand-Braun-Institut, Leibniz-Institut für Höchstfrequenztechnik (FBH) developed novel epitaxial designs and process technology. This enabled the use of broad area mini bars with a narrow stripe width of only 30µm to operate with a brightness that is at least double that of previous state-of-the-art chips with a 100 µm stripe width.

Based on the high brightness diode laser mini bars developed within the BRIDLE project, coordinator DILAS has been able to simplify its established T-bar concept for 105 µm fiber coupling. The company said it has been able to increase the optical output power up to 300 W ex 100 µm. The output wavelength can be stabilized and used for applications such as dense wavelength multiplexing to further increase output power and brightness. Furthermore, the assembly process is fully automated. 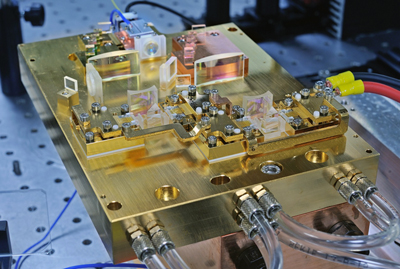 Filters from different international manufacturers were tested thoroughly. For the first time, the Fraunhofer ILT developed concepts that can be used to implement and test compact modules in the medium power range of 10 W to 100 W output, with a fiber having a core diameter of 35 µm and a numerical aperture of 0.2, an output power of 46 W was achieved under experimental conditions. Also, a 7:1 fiber combiner (at 35/105 µm) was developed for further power scaling.

France’s Centre National de la Recherche Scientifique (CNRS)/Institut d’Optique (CNRS-IO) demonstrated a new architecture for passive coherent combining of diode lasers with ridge lasers (delivered by Modulight) and tapered lasers (delivered by FBH). The set-up is based on the separation of the phase-locking stage, which takes place in an external cavity on the rear side of the lasers, and the beam combining stage, which is achieved outside the cavity on the laser’s front side.

This configuration demonstrates successively a combined power up to 7.5W in a single beam from a bar of five high-brightness emitters, using a specifically designed diffractive combiner. Furthermore, the active coherent combining of five tapered amplifiers achieved a power of more than 11 W with a combining efficiency of 76%.

For its part in the BRIDLE project, the University of Nottingham has developed software tools that enable the investigation of coupling between external optics and the diode laser itself. These tools can be used to better understand coherent coupling, wavelength stabilization or parasitic back reflections. The university also developed a dynamic laser simulation tool for CBC diode laser systems.

This software tool is used in conjunction with external cavity models developed at CNRS-IO to investigate the nature and dynamics of the phase locking mechanisms in CBC laser systems. Furthermore, Nottingham’s laser simulation tool Speclase was coupled to external optical design Zemax software for external cavity simulations at the subsystem level.

Finally, industrial applications of the abovementioned prototypes are being investigated by Bystronic Laser and Fraunhofer ILT. For example, certain lasers manufactured by DILAS are being used for selective laser melting of metals at the Fraunhofer ILT.