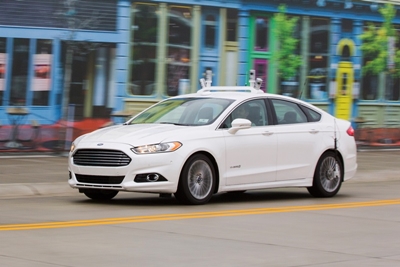 Lidar for the Fusion Hybrid

Denso, a major supplier to the automotive industry, has invested in the Albuquerque-based semiconductor laser company TriLumina.

Spun out from Sandia National Laboratories in New Mexico, TriLumina specializes in VCSEL emitters and has developed products including arrays of the devices for lidar and advanced driver assistance systems.

Denso, whose investment was made via the Japan-headquartered firm’s Silicon Valley office, is itself a supplier of driver assistance equipment, and says that it wants to speed up the deployment of lidar and driver monitoring systems as the industry increasingly adopts autonomous technologies.

TriLumina has developed eye-safe semiconductor lasers that are said to be among the most versatile laser illuminators currently available. “TriLumina is helping to accelerate the automotive industry’s adoption of semi-autonomous and autonomous vehicles by providing lasers for 100 per cent solid-state lidar products and advanced driver monitoring systems,” announced the firm.

Caterpillar on board
Neither Denso or TriLumina disclosed further details of the investment, although the latest Securities & Exchange Commission (SEC) filing from TriLumina suggests that the company has now raised $9.2 million in funding.

Denso’s investment comes just six months after another industry big-hitter, Caterpillar, also acquired a stake in the company via its own venture wing. Just over a year ago, TriLumina said that it had raised $8.5 million in a series A funding round led by Boston-based Stage 1 Ventures.

At the time David Baum, the managing director at Stage 1 Ventures who is known to have a strong focus on the automotive sector, said: "Lidar is the next step for automotive safety enhancements and TriLumina's solid-state lidar solutions are an excellent complement to today's radar and vision systems.”

With Caterpillar and now Denso on board, it appears that Baum has made good on plans to build relationships with some of the key players in the industry.

TriLumina’s CEO Kirk Otis said of the latest development: "It's critical to work with leading tier 1 suppliers like Denso as we introduce and deploy technology that will shape the automotive industry for years to come. It's a tremendous endorsement of our technology to have Denso engage as one of our partners, work with us to become qualified, and help fuel development.”

Gesture control
Aside from the automotive industry, TriLumina is targeting its laser arrays at depth sensing and gesture control for industrial robotics, and the commercial and consumer electronics markets.

Another of its key partners is eyeSight Mobile Technologies, described by TriLumina as the world’s leading gesture-based user interface company. “The ongoing collaboration between eyeSight and TriLumina will offer a powerful gesture interface solution for smart TVs, set-top boxes, laptops and mobile devices that works as well in dark rooms as it does in direct sunlight,” said Gideon Shmuel, CEO of eyesight, when TriLumina announced its series A funding round.

The TriLumina technology developed at Sandia provides for fast, high-power emission from VCSELS, meaning that they can be used outside of their core application in short-range optical fiber communications links.

That high-power technology was developed by John Joseph, who then founded TriLumina to commercialize the patented breakthrough. While individual VCSELs are low in power, Joseph’s idea was to use arrays of the devices instead.

According to the company, these arrays are capable of delivering more than 10 gigabytes of data per second. “Potential applications include connecting any networked device wirelessly at fiber-optic speeds,” reckons the firm.

Other key personnel at TriLumina hailing from Sandia include director of technology Mial Warren, who previously managed the giant lab's photonics research group, and director of product quality Rich Carson, who worked on VCSEL technology both there and at nearby Emcore.