Despite an aborted takeover bid, the LED-making Philips division had a good 2015. 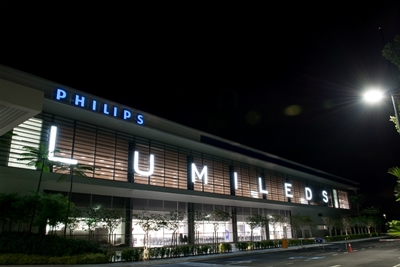 Philips Lumileds and Everlight were the only two manufacturers of packaged LEDs to move up the list of the top-ten producers last year, according to the latest report from analysts at market research and consultancy firm IHS.

Lumileds moved ahead of Korean electronics giant Samsung to rank third in 2015, behind the long-standing market leader Nichia and chief rival Osram Opto Semiconductors. That was despite a difficult year for the Philips subsidiary, which saw a planned sale of the division to a Chinese private equity group scuppered on grounds of US national security.

Everlight moving up
Taipei-based Everlight also moved up the rankings one spot to sixth place in 2015, despite its revenue share declining overall. That was because its US competitor Cree, which ranked sixth in 2014, and Korea’s LG Innotek both saw sales drop by an even larger amount.

“Cree and the major Korean players all experienced double-digit revenue declines in 2015,” reckons the IHS team. “Cree is increasingly focused on its lighting business, as the company’s component business is no longer growing as quickly as it once was.”

They add that Cree has long positioned itself – with some justification – as a higher quality vendor than others. Although this strategy has suffered as the LED market has become increasingly commoditized, Korean companies had managed to position themselves successfully as the low-cost option in general lighting in 2012 and 2013.

The problem for them now is that Chinese firms such as MLS have proved that it is possible to undercut even the Korean giants while offering adequate quality. “In 2015 Samsung, LG Innotek and Lumens were caught in the middle - offering neither the lowest price nor the best quality - with no obvious business strategy to address the issue,” says IHS.

Market down on strong dollar
Overall, the market figures for 2015 measured by the analyst firm were skewed by substantial swings in currency valuations. When quoted in US dollars, the packaged LED market shrank, while in Yen and Euros it grew 5 per cent and 10 per cent respectively.

“2015 was obviously another tough competitive year for packaged LED vendors, with challenges in both backlighting and lighting,” IHS said.

Because the market report focuses on packaged LEDs specifically, it does not include revenues from the large die vendors and LED epiwafer manufacturers like Epistar and San’an.

It appears that Epistar, which is a major supplier to Everlight and last year signed a cross-license agreement with Cree, has not suffered too much damage after a fire at its Taiwan facility earlier this week. 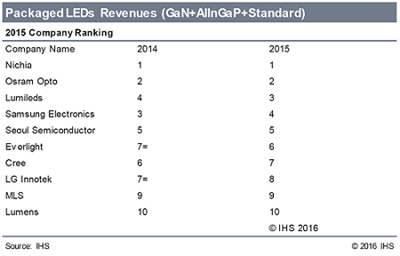 Everlight said that its supply chain had not been impacted by the fire, said to have taken place March 28.

According to local news outlet Digitimes.com, the blaze broke out at around 6pm, in a waste water tank in the basement of its “N3” fabrication facility.

No injuries were reported, and the company is not anticipating any material impact as a result of the incident, reports Digitimes.com, although it also said that N3 had been shut down temporarily as a result.