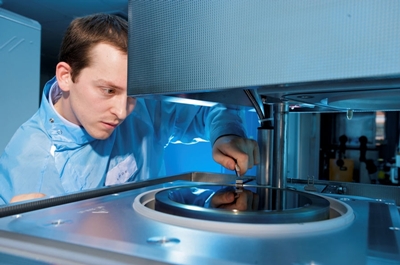 Lasers to make lasers
Along with Elforlight, Rofin and Fianium are involved in a project entitled “making lasers with lasers”, which is led by Jacob MacKenzie at the University of Southampton’s Optoelectronics Research Centre.

They are aiming to develop PLD as a technique for manufacturing high-quality, single-crystal lasing waveguides. “PLD is an established technique for deposition of a range of materials, but few so far have used it to grow single-crystal structures for application as thin-film lasers,” states the project outline.

The second goal is to demonstrate the utility of these devices in "add-on" amplifier modules that can be tailored for commercial laser systems, to enhance output performance by an order of magnitude and address laser manufacturing applications in the materials processing, life-science and medical sectors.

As well as co-operating with the laser company partners, MacKenzie and colleagues will work with the UK Association of Industrial Laser Users (AILU) and the EPSRC’s own dedicated center for innovation in laser production at Heriot-Watt University near Edinburgh.

Bio-inspired patterning
In another of the funded projects, a team led by Marc Desmulliez at Heriot-Watt will work on industrially relevant manufacturing processes inspired by phenomena in the natural world.

“Selective formation of metallic nanoparticles in plastics has a wide range of uses for generating conductive tracks, creating antimicrobial surfaces and for the fabrication of sensors and actuators which have a broad spectrum of applications such as microsystems, printed electronics and wearable devices,” states the project summary.

Terahertz stress detection
Renishaw and Rolls-Royce are partnering on another Heriot-Watt-led project, this time under the guidance of principal investigator Andrew Moore. The idea here is to develop a terahertz imaging technique to detect hidden stresses underneath ceramic coatings now being used in aircraft.

“This project is concerned with measuring the stress-induced birefringence in materials that are opaque at visible wavelengths,” explains the project summary. “We will use terahertz illumination up to 7.5 THz, where some fraction is transmitted through a range of non-polar materials including ceramics, plastics and composites.”

The new technique envisaged should enable in-process control during manufacturing and in-service quality assurance, for a range of materials where this is not currently available.

UV-enhanced ALD for smart coatings
The fourth project involves Renishaw, Nanoco and Pegasus Chemicals, and is being led by Paul Chalker at the University of Liverpool. They will work on a new approach to photochemical ALD, to deposit ultra-thin, functional coatings on three-dimensional components.

To achieve that, the team plans to adapt an existing ALD reactor at Liverpool to incorporate a larger chamber able to host an array of three-dimensional components and additional reactor equipment.

“The modified system will be built to accommodate ultraviolet sources for the processing of 3D components or the treatment of powder beds,” states the project summary. “We also propose to use new UV source lamps to target the wavelength of the output from a range of commercially available UV lamp modules to photochemically decompose the precursors to form the film.”

The chamber will also be adapted to enable in situ monitoring of the deposition process using a fibre-optic Raman probe and a quartz crystal microbalance, which will provide feedback on the start of deposition as a function of illumination, substrate temperature, flow rates and more.

“If achieved, these objectives represent a significant advancement of existing ALD technology and would open up new applications where ultra-thin functional materials can be exploited, such as display electronics, biomedical devices and photovoltaics amongst others,” says the team.

Each of the four projects is set to run for around three years, with EPSRC providing aggregate funding of £2.7 million.