Greentech Media Research says that installations will more than double, to around 16 GW, this year. 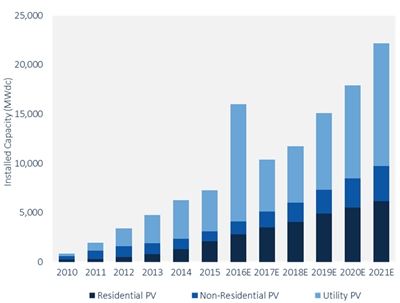 After what is described as a “momentous” 2015 for solar power in the US, this year will smash all previous records, with installations set to more than double.

That forecast comes from the analyst team at Greentech Media (GTM) Research, who reckon that close to 16 GW of photovoltaic power will be installed this year – up from the record figure of 7.3 GW in 2015.

Utility boom
With dozens of major utility build-outs already in the pipeline ahead of what had previously been expected to be the final year in which projects could qualify for the US investment tax credit (ITC), 2016 was always set to be a banner year.

But after Congress agreed a compromise cross-party deal on oil exports and the ITC for clean energy technologies in December, the post-2016 outlook has brightened enormously.

In the executive summary of their US Solar Market Insight report, lead author Cory Honeyman and colleagues at GTM Research and the Solar Energy Industries Association (SEIA) write:

“2015 was a historic year for US solar policy and regulation, with a number of decisions at both the state and federal level that will determine the trajectory of the market’s future growth.”

Most obviously, that relates to the ITC compromise deal, which preserves the federal support mechanism through at least 2021. GTM Research now estimates that this extension alone will result in more than 50 per cent net growth in US solar installations between 2016 and 2020, an additional 24 GW compared with what had previously been expected.

“As a result of this change and other market developments since December, we now anticipate that cumulative solar photovoltaic installations will reach 97 GW by the end of 2020,” the analyst team added.

Solar beats gas
The report also confirms earlier suggestions that more PV power was added to the US grid in 2015 than any other form of electricity generating capacity except wind. PV accounted for 29.4 per cent of the new generating capacity, with natural gas responsible for 29 per cent and wind power 39 per cent.

While the sharp rise in PV installations in the US in 2015 was largely due to residential additions – up 66 per cent to 2 GW – it is still the utility sector that is responsible for the largest chunk of capacity coming online.

In 2015, just over 4 GW of utility-scale solar was connected to the grid, up 6 per cent on 2014. But with more than 5 GW already under construction, 14.6 GW contracted, and another 27 GW in the pipeline, the utility sector will power near-term growth of the market.

Utility installations will near-triple this year, predicts GTM Research, meaning that the total US PV market will more than double compared with 2015.

“The wheels are already in motion for US solar to benefit in 2016 from a double-digit-gigawatt pipeline of late-stage utility PV projects that rushed through development last year,” the analysts wrote.

And while that prior pull-in of projects will mean a sharp slowdown in 2017, growth is set to resume in 2018 – notwithstanding the potential election of any PV-phobic new President - before surpassing the 2016 figure in 2020.

“Bleak” outlook for concentrating solar
In stark contrast, the prospects for both forms of concentrating solar power – thermal (CSP) and PV (CPV) – are “bleak”, say the analysts. While the 110 MW Crescent Dunes CSP project achieved commercial operation in November 2015, other developments had been put on ice while the ITC decision was in the balance.

“Even with the federal ITC extension, the outlook for the CSP market will depend on further progress made toward mitigating early-stage development hurdles, lowering hardware costs, and strengthening the ancillary and capacity benefits provided by CSP paired with storage,” says GTM.

Meanwhile the outlook for CPV is looking close to non-existent, with a recent report co-authored by the US National Renewable Energy Laboratory (NREL) describing the industry as being “in severe crisis”.