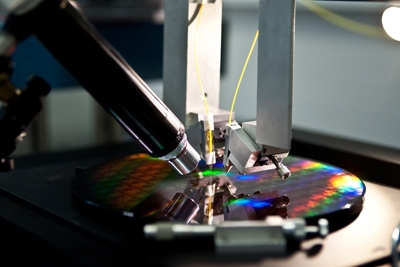 A promising new silicon technology for mid-infrared photodetectors has won nearly £250,000 in an innovation award from the UK’s Royal Society.

It has handed the Brian Mercer Award for Innovation, aimed at scientists who wish to develop an already proven concept or prototype into a near-market product ready for commercial exploitation, to silicon photonics expert Kevin Homewood.

Shortly to take up a professorship in semiconductor optoelectronics at Queen Mary University of London, Homewood is developing silicon-based photodetectors that operate in the mid-infrared (mid-IR) region – currently the preserve of more exotic and expensive materials like mercury cadmium telluride (HgCdTe) and indium antimonide (InSb).

If silicon-based detectors can be manufactured using conventional semiconductor fabrication techniques in a commercially viable way, it could revolutionize optical systems operating in this wavelength range.

Homewood said that the Royal Society support would enable him and his colleagues to take the technology “to the next value point”. He explained:

“All good current mid-IR detectors and cameras have to operate at cryogenic [i.e. liquid nitrogen] temperatures. Our technology, because of the low leakage currents inherent in silicon diodes, has the potential to operate at much higher temperatures, even up to room temperature.”

In principle, this advantage could open up what Homewood calls the mass environmental sensing market that is being driven by the emerging “Internet of Things”. The potential to exploit the mid-IR region with integrated photonic devices like quantum cascade lasers is also the focus of the "MIRPHAB" pilot line project funded by the European Commission via the Photonics21 public-private partnership (PPP), and for which the availability of silicon-based photodetectors would be hugely useful.

Investing in good ideas
Royal Society fellow Hagan Bayley, who chairs the Brian Mercer Awards panel, said, “Science has the potential to solve some of the great challenges we face, but only if we continue to invest in good ideas.

“Professor Homewood is working on technology which could extend the wavelength range of photodetectors into the infra-red with low-cost green materials. Such detectors will have a wide range of uses. The Royal Society is pleased to help move this technology a step closer to application.”

The Royal Society says that this particular award is designed to promote innovation and fill the funding gap between scientific research and the exploitation of an idea through venture capital investment.

Homewood has been involved in silicon photonics start-up companies and the world of venture finance before, having founded the University of Surrey spin-out Si-Light back in the early 2000’s. The company planned to develop near-infrared silicon-based LEDs and laser diodes, fabricated by implanting rare-earth ions into the semiconductor material to create strains and confine charge carriers to a local region.

However, despite attracting seed funding of £150,000 from the UK’s Cascade Fund in 2006, Si-Light does not appear to have produced those devices in serious volumes.

If the development of mid-IR photodetectors works out more successfully, the devices could find future applications in smart buildings and cities, and potentially in biophotonics, where the mid-IR “fingerprint” spectroscopy region could be exploited in diagnostic breath testing.

‘Labs to riches’
Homewood was due to receive the prize at the Royal Society’s annual “Labs to Riches” event taking place March 10 in London. This year the event, designed to bring together leading scientists, engineers, industrialists and policymakers, features a keynote address by lastminute.com co-founder Martha Lane-Fox.

“The event will focus on the theme of entrepreneurial risk and reward, and will explore how science and innovation systems can best support and encourage entrepreneurial success, strengthening the case for the importance of science and industry to economic growth and productivity,” said the Royal Society, suggesting that even this most august of scientific societies is now looking hard at technology transfer and return on investment.

Homewood’s was not the only optics and photonics related technology to win backing at the central London event. Two other prizes, each worth £30,000 and known as the Brian Mercer Feasibility Awards, were handed to Paul French and Teuta Pilizota, to aid the development of new imaging techniques.

It has been used to image tissue samples and live organisms, and could be extended to deliver rapid 3D imaging capable of distinguishing between different types of tissues or cells, perhaps providing a way to track cancer progression and cell responses to inflammation and infection.

“This will address the lack of online information available to industrial biotechnologists when assessing product quality and quantity and will transform assessment of compound production,” said the Royal Society.