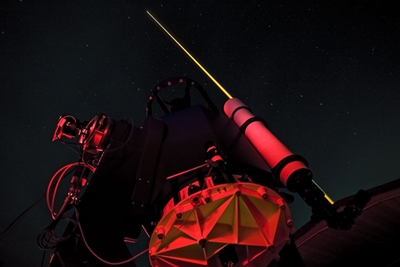 Researchers in China say they have discovered a simple way to increase the brightness of laser guide stars by as much as 50 per cent.

The artificial beacons, which are key parts of the adaptive optical systems used in large telescopes to counteract the blurring effect of the Earth’s atmosphere and sharpen up astronomical images, are created by firing a yellow-orange laser into the night sky.

The laser excites sodium atoms high in the Earth’s mesosphere, at an altitude of around 90 km, making them glow and twinkle just like real stars. When the guide star’s emission is captured by the telescope, it is fed into the adaptive optical system and a deformable mirror to correct for the atmospheric distortion.

However, in the journal Nature Scientific Reports, Yan Feng and colleagues from the Shanghai Institute of Optics and Fine Mechanics say that the benefits of the guide star are reduced substantially by the phenomenon of precession - where sodium atoms are affected by the Earth’s geomagnetic field.

To counteract that, they suggest switching the excitation laser between left and right circular polarization at the so-called Larmor frequency – the angular frequency that describes the rate of precession.

The brightness of the guide star is one of the key factors in the performance of adaptive systems. Feng and colleagues performed a numerical simulation of the European Southern Observatory’s (ESO's) adaptive system at Paranal in Chile that suggests a major improvement is possible:

“Currently, the VLT [Very Large Telescope] of ESO in Chile, the Keck Observatory in Hawaii, and the Starfire Optical Range [US Air Force research lab in New Mexico] have continuous-wave 589 nm lasers installed,” Feng told optics.org. “The paper calculated the case of VLT. Theoretically, it is found that up to a 50 per cent enhancement in guide-star brightness can be achieved with the approach.” 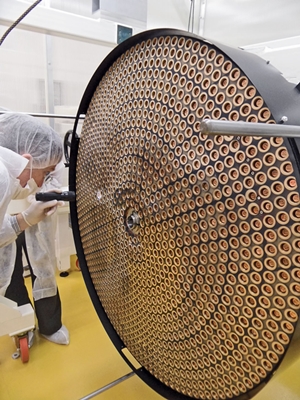 Deformable mirror at the VLT

Straightforward ‘upgrade’ possible
While developing a 589 nm laser with the kind of pulse characteristics needed to match the Larmor frequency would be extremely challenging, achieving a similar effect by switching polarization with a continuous-wave laser should be much more straightforward.

“The polarization switching can be implemented in existing continuous-wave laser guide-star systems rather readily,” Feng explained. “A quarter-wave plate is usually inserted in the laser delivery path to generate a circular polarized beam from a linearly polarized beam for optical pumping.

Feng hopes that some of the world’s major observatories will now consider implementing the polarization scheme as a way to “upgrade” their adaptive systems, and has also discussed the idea with Toptica president Wilhelm Kaenders. Toptica developed four high-power solid-state 589nm lasers for guide stars at the VLT, the first of which was switched on last May.

“He [Kaenders] thinks this is a fully valid next-step proposal,” Feng said, adding that the Toptica lasers could accommodate such a change. He and his Shanghai team also develop their own sodium guide-star lasers, and may look to test their idea directly.