Self-reconfiguring “BVT” expected to be a crucial part of flexible, optimized networks to handle booming data. 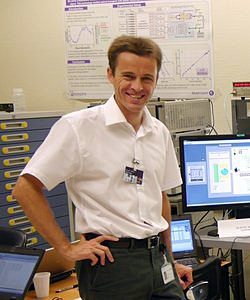 Researchers at Nokia Bell Labs (NBL), France, have developed a new bandwidth variable transmitter (BVT), which they say could become “a crucial component of new flexible and optimized networks.” The BVT converts electronic signals to optical signals – but with a bandwidth that can change depending on need. Moreover, it works without service interruptions, an advantage known as being “hitless”.

Arnaud Dupas, of NBL commented, “This is really the first device that can transmit data in optical transmission networks with a bit rate change in a hitless way. As network demands continue to grow, this device will help to enable optical networks of the future with seamless network optimization and flexibility."

Dupas will be making a presentation to describe the device at The Optical Fiber Communication Conference and Exposition (OFC), taking place between March 20-24 in Anaheim, California, USA.

The background to BVT’s development is that the phenomenal growth of data traffic has required the development of elastic optical networks, flexible enough to handle a wide range of data types and transmission rates. But even without these networks, traffic is dynamic, varying with the time of day and changing consumer and business demands.

Dupas explained, “Signals also don't simply travel from one point to another. Nodes in the networks have filtering functions that select and redirect signals, adding another level of variability. The networks themselves constantly evolve over time, as people add and change those filtering functions. A transmitter that can adjust for varying bandwidths allows for optimized performance without requiring constant upgrades of infrastructure – which would be impractical and expensive.”

Most conventional BVTs work by changing the format of the optical signal, converting between digital and analog formats, Dupas said. But the NBL researchers' new BVT instead changes the symbol rate, also known as Baud rate or modulation rate, which is the number of signal events transmitted per second (a single signal event can encode one or several bits of information).

The advantage of focusing on the symbol rate is that it is easier to implement with electronics and is cost-effective, Dupas explained. This approach incorporates smart processing and makes the transmitter hitless, allowing it to work without interruption and data loss. Normally, transmitters have to reconfigure themselves when interrupted, which can take several seconds or minutes and requires the traffic to be stopped. But the new transmitter can configure itself in less than 450µs.

The new BVT device is connected to a commercially-available optical transport network switch, which aggregates all kinds of signals, such as video and audio, and puts it through the transmitter. It works typically at a bit rate between 10 and 107 Gigabits per second. Still a prototype, the BVT would be only one element of a large flexible optical network. The next step, Dupas says, will be to test it in the field with network operators, integrating it with the management software and systems that control a network from end-to-end.