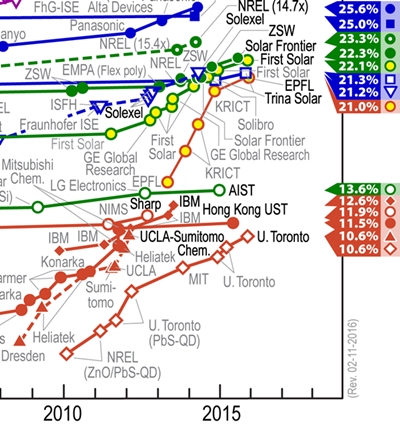 US photovoltaics giant First Solar has set another world record for thin-film cadmium telluride (CdTe) cell conversion efficiency, with a 22.1 per cent device.

That improves on the 21.5 per cent figure set by the same company last year, and suggests that First Solar’s CdTe technology remains on track to catch up with the efficiency of rival multi-crystalline silicon modules.

Certified at Newport’s Technology and Applications Center (TAC) photovoltaics laboratory, the milestone has already been added to the US National Renewable Energy Laboratory’s chart of best research-cell efficiencies.

For comparison, Solar Frontier has recently set a new world-best of 22.3 per cent with a thin-film copper indium gallium diselenide (CIGS) design, while Trina Solar has hit 21.3 per cent with a multi-crystalline cell.

Whether or not any of the breakthroughs shown with small-area laboratory cells make it to full-sized production technology remains to be seen – although all three companies have a strong track record in that regard.

“This is the ninth substantial update to CdTe record efficiency since 2011, firmly establishing a sustained trend of rapid performance improvements that significantly outstrips all other commercial technologies,” the company noted.

Looking at the NREL chart backs up that claim, with only perovskite cells – none of which are in commercial production thus far – increasing in efficiency at a faster rate than CdTe.

“We are tracking very closely to a technology roadmap we first presented in 2013 and revised upward in March 2014," said Raffi Garabedian, First Solar's CTO. "At that time, we said we'd hit a 22 per cent research cell efficiency milestone by the end of 2015. We've delivered on that promise.”

Garabedian reckons that First Solar has been able to improve the efficiency and energy density of its commercial PV modules at a rate at least three times faster than multi-crystalline silicon rivals – the most directly competitive technology to thin-film CdTe and CIGS. “We fully expect to further separate ourselves from the pack in coming years,” he added.

While 22.1 per cent is the new laboratory benchmark for cells, in comparison First Solar's best-performing manufacturing lines are now producing PV modules with 16.4 per cent conversion efficiency. The average performance is now 16.1 per cent – a remarkable improvement from 14.4 per cent just 12 months ago.

6GW in the ground
Discussing the company’s latest financial results, First Solar CEO Jim Hughes reminded investors that the firm had already pushed its module efficiency to 18.6 per cent in the laboratory last year, suggesting that this placed it above the best recorded multi-crystalline silicon modules.

As one of the few solar PV companies to have held steady amid the wild fluctuations of the market over the past decade, First Solar added that it had just passed another milestone, with 6 GW of peak PV capacity now installed by its engineering, procurement and construction group.

Its first installation was a 10 MW solar farm in Nevada back in 2008, with the largest projects including two 550 MW utility-scale installations completed last year - each comprising more than 8 million modules.

Coupled with the recent boost provided by the US solar investment tax credit (ITC) extension, the efficiency drive suggests that the company is well on track to stay at the forefront of the industry.