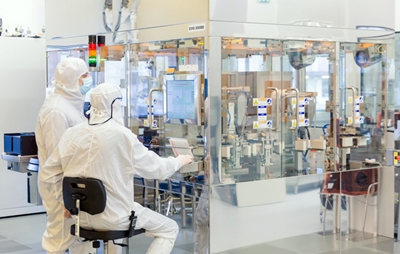 by Ford Burkhart
Researchers connected with LETI, the French technology research institute, told their story to SPIE Photonics West attendees in a satellite session, detailing how their projects are helping bridge the gap between research and industry – a recurring theme at the wider event.

Ludovic Poupinet, head of LETI’s optics and photonics division with its ten labs and 300 research staff, summed up the message saying LETI’s biggest strength is flexibility. “That’s what we do,” he said, “in many kinds of partnerships with universities, with diversity of process, and integration of heterogeneous nano devices.”

“We can address users with large sets of technology, not just one idea,” he said. “We are always welcoming new problems.”

HP source
With a nod to the Americans in the audience at San Francisco’s St. Regis Hotel, across the street from the Moscone Center, Poupinet recalled how HP Labs approached LETI a few years ago seeking help in silicon photonics. “They could they could not find in all the world a place with people ready to address their specifications.”

A small collaboration is underway, he said, adding, “We are extending it now, fabricating components for them.” Other ongoing work on silicon photonics at LETI includes the four-year “PLAT4M” European project, which involves IMEC and ST Microelectronics, among others.

The research center – a division of the French Alternative Energies and Atomic Energy Commission (CEA) – plays a similar role to the Fraunhofer organization in Germany and IMEC in Belgium, and has 1,700 researchers in all.

Neurophotonics
Based in Grenoble, LETI is best known for micro- and nano-electronics development, with Poupinet pointing to its work on image sensors for smart phones as one of its most significant accomplishments.

LETI also has a strong record in military, space, and X-ray applications, and typically obtains 60-70 new patents per year. “We are able to cover the full spectrum of research activities,” Poupinet said, with an emphasis on integration, miniaturization, and industrial connections. “We are an ecosystem of industrial partners for component manufacturing,” he added.

In San Francisco Michael Roukes, the Robert M. Abbey Professor of Physics at Caltech in Pasadena, California, described his “massively parallel interrogation” project with LETI, using photonic nanoprobes to study brain activity - a field he refers to as “integrated neurophotonics”.

He said the neuroprobes are able to measure via 1024 channels. And although, in his words, that still represents “not even a drop in the bucket” when measured against the 100 billion neurons in our brains, Roukes expects the number to rise to 100,000 channels within four years.

That progress should be accompanied with the ability to “massively multiplex” the neural probes. “There are great things to come in this field, and they will have a great impact in brain science,” he said.

Molecular sensors and imaging
Sergio Nicoletti, of LETI’s optics and photonics department, described his group’s research on detecting chemicals at the “sub-parts-per-billion” level. The spectral sensors are able to measure “clear and intense fingerprints of molecules” in the mid-infrared region, and in turn monitor gas emissions for public health.

Nicoletti’s lab is also working on lab-on-a-chip prototypes of sensors based around tunable laser diode spectroscopy. Using a monolithic array of quantum cascade lasers (QCLs), LETI researchers have developed a mid-infrared photonic integrated circuit (MIR-PIC) platform, which can switch between each QCL wavelength.

LETI’s QCL-focused spin-out company mirSense was among those in the French pavilion at the nearby Photonics West exhibition, showcasing its compact, portable and sensitive spectroscopic devices.

Recent demonstrations have included a state-of-the-art uncooled terahertz video imaging camera, which is based around a new (and patented) antenna-coupled bolometer array.

“We cover the whole value chain,” Simoens said, “from optics, to the system level.” He also recalled the role of LETI in design and fabrication of a much larger bolometer-based camera for the European Space Agency’s Herschel space telescope, launched in 2009 to observe in the far-infrared spectral region.

Like the mirSense QCLs, the company’s gallium nitride devices are the result of long-standing compound semiconductor material expertise developed at LETI, integrated with the advantages provided by more conventional silicon semiconductor platforms.

The “iLED” matrix technology, showed off with a demonstration at January’s Consumer Electronics Show in Las Vegas, could wind up being used in automotive headlamps, tiny wearable screens, and head-up displays.