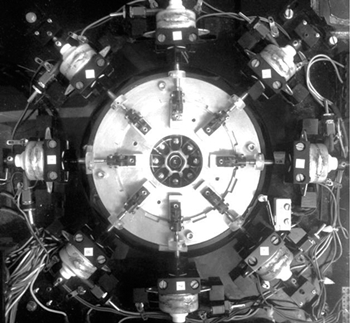 A research effort involving Laser Zentrum Hannover (LZH) in Germany is developing a new, laser-based treatment for presbyopia – the condition that impacts near vision in people from around the age of 40 onwards.

At the moment presbyopia – caused by the age-related stiffening of the lens in those affected – is usually treated with simple solutions like reading or bifocal glasses, with multi-focal contact lenses from the likes of Bausch + Lomb becoming available more recently.

Some laser procedures have also been developed, but if successful the LZH-led project could lead to a "gentle" new femtosecond laser technique that makes tiny cuts in the lens to restore the flexibility that is lost with age.

One is LZH spin-off company ROWIAK, whose CEO Holger Lubatschowski was previously head of biomedical optics at LZH, the other is Swiss start-up Optimo Medical, which specializes in optical simulations for eye surgery.

Biel-based Optimo has developed its “OptimEyes” finite-element software for patient-specific surgery, while ROWIAK manufactures complete laser systems at its base in Hannover.

LZH’s Alexander Krüger says that they are working together to develop an experimentally validated simulation software to predict and optimize the visual quality outcome of refractive laser surgery on both the crystalline lens and cornea.

ROWIAK and LZH have previously collaborated on the related “IKARUS” project, which developed the optical hardware and control software needed for optical coherence tomography (OCT) image-guided femtosecond laser surgery on the crystalline lens, as well as the vitreous and epiretinal zone of the eye.

“IKARUS ended successfully and the LZH has a long-lasting and fruitful co-operation with ROWIAK,” Krüger told optics.org. There is a strong connection between the two projects, he explained.

In IKARUS, OCT-guided femtosecond laser-assisted cataract surgery and presbyopia treatment were both investigated. The latter technique has been dubbed ‘fs-lentotomy’. “We concentrated on finding ways to integrate the OCT imaging into the surgical laser system,” Krüger added.

Lens stretcher
Meanwhile LZH has also recently completed a project involving a finite element simulation of crystalline lens mechanical behavior during and after fs-lentotomy, in cooperation with researchers at the Leibniz University Institute of Continuum Mechanics.

“The RayFEye project takes the results of both projects, combines them and goes beyond,” said Krüger. “After treatment with fs-lentotomy not only the crystalline lens continuum mechanics but also its optical properties have changed.

“There is more to it than just the curvature of the crystalline lens contour influencing the optical ray path. Part of the lens’ refractive power results from a gradient index within the lens body. Thus the RayFEye project will combine the simulation of mechanical properties with optical properties and will validate the simulation with experimental data on extracted [pig] lenses with an accommodation apparatus called a ‘lens stretcher’.”

That equipment, which will be used to measure the influence of the laser micro-cuts on the crystalline lens, is currently being developed by LZH’s image-guided laser surgery group.

The complex setup is able to stretch and un-stretch the crystalline lens, simulating different focus distances of the eye. “The scientists can measure the changes in the beam path (using ray tracing) through the lens both before and after the micro-cuts in the eye have been made,” LZH said.

The result should be an optimized set of cutting patterns for surgical correction of presbyopia, using laser pulses that are so short that they transfer no heat to the eye tissues.

Last year Krüger and colleagues published positive results from a study on five lenses from pigs that were cut using a femtosecond-pulsed laser from IMRA America. “The laser procedure could be conducted successfully on all lenses,” they reported in the journal Investigative Ophthalmology & Visual Science. “There was no damage or detachment of lens capsule visible on the OCT images after the procedure.”

Germany’s Federal Ministry of Education and Research (BMBF) and the Swiss State Secretariat for Education, Research and Innovation (SBFI) are funding the project.