Sheffield spin-out sets up in Cardiff to take advantage of local compound semiconductor expertise and investment. 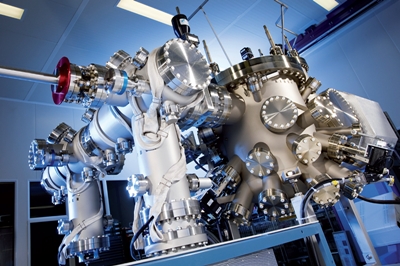 Stratium, a new spin-out company from the University of Sheffield in the UK, has launched its first quantum cascade laser (QCL) for gas sensing applications.

Although the company, which will exhibit at the forthcoming SPIE Photonics West event in San Francisco, developed its QCL designs at Sheffield, it has now re-located to Cardiff – where it can take advantage of a £50 million “Catapult” investment in compound semiconductors.

Stratium’s commercial director Phil Cornish told optics.org that the firm has particular expertise in short-wavelength QCLs, thanks to the incorporation of antimonide layers in its epiwafer structures.

So far, Stratium has raised around £300,000 in seed capital investment from IP Group and Finance Wales. That has supported the launch of its “Bruar” product, a mid-infrared QCL chip-on-sub-mount device that operates at room temperature and is initially aimed at gas sensing and environmental monitoring.

“Currently we have three wavelengths available, 2.8µm, 3.3µm and 10.0µm, which are suitable for the detection of ethanol, methane and ammonia respectively,” Cornish said. “We are focusing on emerging OEM gas sensing markets by introducing the next generation of advanced QCLs, with industrial-grade performance and reliability.”

Cardiff Catapult
Stratium was formed in July 2015 after collaborative semiconductor laser research and innovation between two Sheffield departments - Physics and Astronomy and Electronic and Electrical Engineering.

Other members of the Stratium team include technical director Kenneth Kennedy, who is also head of device fabrication at the EPSRC center in Sheffield, chief engineer and QCL expert Dmitry Revin, and chief scientific advisor John Cockburn – a professor in Sheffield’s Department of Physics and Astronomy.

“We are strategically based in Cardiff, due to the strong business support network in the region and the increasing activity in the 'commercialization' of compound semiconductor technology [there],” Cornish explained. “Due to our existing relationships and location, Stratium is ideally placed to engage with the UK’s top research and development centers to enhance [the company’s] capabilities and create new highly skilled jobs.”

Trace gas detection
Stratium’s QCL’s are said to allow the detection and analysis of trace gases at concentrations as low as the parts-per-trillion (ppt) range. Light sources emitting in the mid-infrared region can detect gas molecules by targeting the specific absorption wavelengths that correspond to quantum transitions between vibrational and rotational energy levels. However, most QCL devices developed so far have tended to operate at the longer-wavelength end of the mid-IR region.

One of the other applications to emerge for QCLs is infrared countermeasures, where aircraft are fitted with lasers or other light sources to distract and defeat heat-seeking missiles. In the US, San Diego-based QCL company Daylight Solutions is working closely with Northrop Grumman and Selex ES on the technology.

Cornish said that while countermeasures is not a target application for Stratium right now, the company has had discussions with a European group on the topic, with a view to protecting civilian aircraft.

“We expect to have a product to address this market, which is in our product roadmap for mid-2017,” he told optics.org.

“This is an exciting time for the company,” Cornish added. “There are increasing opportunities for the adoption of QCL technologies across several market sectors. With committed investors Stratium is well placed to fulfil the need for QCLs with industrial-grade performance and reliability.”

While the initial investment will help to optimize Stratium’s existing QCL material growth, fabrication, test and characterization capabilities, a future funding round could allow the company to acquire its own MBE tool.

• The 50 mW peak power Bruar QCL is available now via the Stratium web site and the company is set to exhibit a higher-power version as part of the UK Pavilion at Photonics West later this month, booth #5135.