Epiworks facility in Champaign, Illinois, was acquired earlier this year by the growing laser and materials company. 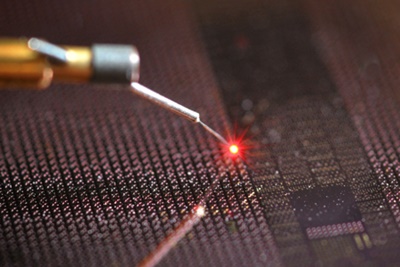 EpiWorks, the epiwafer production division belonging to the Pittsburgh-headquartered photonics company II-VI, says that it has broken ground on its new state-of-the-art production facility in Champaign, Illinois.

Expected to be completed by the middle of next year, the expansion will deliver a significant increase in VCSEL device production capacity, as part of a planned four-fold jump in overall output at the site within three years.

II-VI sees a large and growing opportunity in VCSELs, which are tipped to be found across a much-expanded range of applications in the coming years. Already used widely in short-reach data communications, computer mice and gesture sensing, major applications in the future look likely to include high-speed sensors in autonomous vehicles, for example.

II-VI is not the only company looking to expand its VCSEL production – earlier this month its European rival Philips Photonics said that it would double manufacturing capacity at its production site in Ulm, Germany. And in July this year US-based Princeton Optronics said that it had begun volume production of both single-emitter devices and VCSEL arrays for camera autofocus applications in mobile handsets and tablets.

The Champaign investment will boost II-VI’s production of both gallium arsenide and indium phosphide optoelectronic components, in response to booming demand prompted by growth in cloud computing services and the associated data center requirements.

II-VI Epiworks told optics.org that the investment would see VCSEL epiwafer production on 6-inch wafers complemented by fabrication of Fabry-Pérot and distributed feedback (DFB) laser structures, as well as a variety of RF devices.

MOCVD tools installed
EpiWorks founders Quesnell Hartmann and David Ahmari, who sold the University of Illinois spin-out company to II-VI earlier this year for $43 million, said in a II-VI release:

“Immediately after merging with II-VI in February, we ordered three new MOCVD production tools and filled our current cleanroom space.

“These systems have already been installed, and we have now moved into the next phase of growth by expanding our cleanroom space, launching an aggressive hiring plan, and working to build the industry’s most technologically advanced and efficient manufacturing line.”

While automation will be a key element of that technological advancement, the extended epitaxial wafer production space and new cleanroom housing a state-of-the-art wafer characterization and test laboratory will require plenty of new recruits.

Ahmari said that he expected the EpiWorks headcount to grow from the pre-acquisition level of 70 to around 200 once the three-year expansion is completed - with room for further growth if required after that.

At present the company says that it is actively looking for experienced managers, engineers and technicians to work at the facility. II-VI CTO Giovanni Barbarossa, also president of the firm’s “Laser Solutions” business unit, added:

“Our technology is being adopted in many applications, and we are ensuring that our capacity continues to meet customer demand now and in the future. The new capacity will support our RF and photonics businesses, and we will have more resources to research and develop new materials and products.”

II-VI will also have VCSEL epiwafer production capacity at the Anadigics manufacturing facility in Warren, New Jersey, that it acquired along with EpiWorks in early 2016. Anadigics had already begun developing a 6-inch GaAs wafer production process for VCSEL fabrication prior to the deal, expertise that could give II-VI an edge over competitors in terms of device yields and scalability.

While VCSELs are a key driver behind the expansion, Ahmari pointed out: "We are going to be a leading VCSEL wafer producer, but the majority of our business [will] be with other wafer technologies. Wall-to-wall, we are going to be able to start several hundred thousand 6-inch wafer equivalents per year."