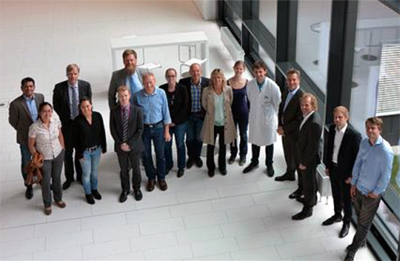 The BioPACE project team at the kick-off meeting in Hannover.

The goal of the BioPACE project is to research and develop biohybrid implants for light-induced cardiac excitation, defibrillation as well as stimulation of skeletal muscles. To achieve this innovative therapeutic concept, the partners, LZH, Hannover Medical School, the Center for Applied Nanotechnology (Hamburg) and company LifePhotonic, are combining their latest findings from the project’s related fields of photonics, optogenetics, nanotechnology and medicine.

Another novelty is the material: part of the pacemaker consists of biological material. With the pacemaker being made from the patient’s own cells, rejection reactions by the human subject’s body can be minimized. Integrated in a hydro gel, these cells are doped with upconverting nanoparticles (UCNP). These are required to cause a contraction in reaction to the optical stimulation. The impulse is imparted to the surrounding cells, and thus the cardiac muscle contracts.

Other applications are envisaged by the BioPACE team. With this revolutionary approach, the scientists expect that procedures will not only be limited to an improved treatment of cardiac arrhythmia. At a later stage, they say that a biohybrid defibrillator could also be developed. By such means, long-term consequences of the treatment – for example, the scarring of the tissue – could be reduced or even completely avoided.

The BioPACE project has had an unusually short development time, because the partners have been able to make use of pre-existing results for their sub-projects. They say that the challenge now is to combine these results and to prepare them for use in the pacemaker. The LZH researchers are focusing on the coupling and distribution of light in the cardiac muscle.

LZH is the coordinator of the BioPACE project, which stands for Biohybrids for Photon-Activated Cardiac Excitation. Hannover Medical School provides the expertise for cell fabrication and implementation. The required fiber optic waveguides come from LifePhotonic, and the converting nanoparticles, such as UCNPs or quantum dots, are provided by Hamburg’s Center for Applied Nanotechnology.

Applications on the cardiac muscle and the skeletal muscles are explored by Universitätsklinikum Bonn. The project is supported by the German Federal Ministry of Education and Research via the VDI Technologiezentrum within the scope of the funding initiative Photonik Plus – New Basic Technologies in Optics for a duration of three years.