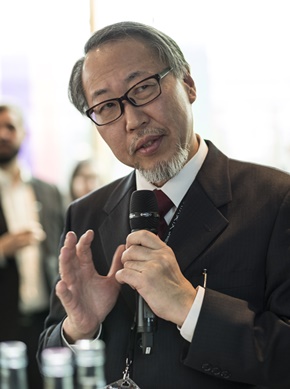 A new approach to illumination that is said to overturn conventional wisdom in machine vision has won the Vision Award 2016 – handed out at the Vision 2016 trade show taking place this week in Stuttgart, Germany.

Developed by the tiny Tokyo-based company Machine Vision Lighting (MVL), the technique is known as “variable irradiation solid angle” (VISA) and has been developed with visual inspection of metals and shiny surfaces in mind.

Instead of relying on ever brighter or more even illumination, which has typically been the approach taken in machine vision, VISA works by creating identical irradiation at every single point on the surface of an object – whatever its distance from the light source.

That is seen as particularly useful for machine reading of three-dimensional features on shiny surfaces like metal, where strong reflections and shadowing present technical difficulties.

Light control
Receiving the award - plus €5000 - from event organizers in Stuttgart, MVL’s CEO and sole employee Shigeki Masumura said that the LED-based technique is able to control the optical axis and the shape of the irradiation solid angle produced by a red-green-blue light source.

He explained that conventional techniques deliver inferior images because each of the different points on a reflective, three-dimensional surface are illuminated from different angles of inclination and angular range. Those points then reflect light in different ways, making it difficult to capture images with the kind of detailed visual information required by an automated vision system.

Even if specialist LED illumination sources are used to deliver parallel light to the target object, there is very little scope for optimizing the setup to retrieve detailed information on features of interest.

Half-plane angle
Using the example of a coin, which has various three-dimensional features such as the date of issue stamped upon it, Masumura showed how changing the half-plane angle of illumination yielded images with very different levels of contrast and clarity.

Using the VISA system, it is possible to optimize the illumination for the specific contours of the coin, and to do that with each of the red, green and blue components individually, if so required.

It means that the technique could be used to detect faint dents or scratches on an otherwise flat sheet that would be difficult or impossible to spot with the naked eye.

“It is possible to convert the surface conditions of warped or rough surfaces that are not completely flat over the whole range of a surface into a color gradation, to precisely capture 3D information of bent metallic and shiny surfaces – something that has been difficult or impossible until now,” MVL claims.

Priest turned consultant
Masumura, who spent five years as a Buddhist priest before becoming a technical consultant in the lighting field, told optics.org that VISA also yielded better results than laser systems twice as expensive as his equipment.

Though reticent to disclose any technical details about the light source inside the system, or plans to fully commercialize the VISA technology, Masumura did say that some trial versions of the equipment had been used by early adopters under non-disclosure agreements.

He thinks that it should be possible to develop a final version by the end of 2017, by which time it is likely that the "VISA" moniker will have been dropped - MVL's web site states that a new name will be in place by the end of this year.

Having started up MVL as recently as 2014, Masumura beat four other companies that had been short-listed for the Vision Award 2016.

Also on the short-list were the Swiss firm ViDi Systems, for its artificial intelligence analytics platform for machine vision; US-based Princeton Infrared Technologies for its SWIR and visible line-scan camera; Austria’s Perception Park for its hyperspectral machine vision system; and US-based TAG Optics for its ultrafast 3D photography technology.