Exchange of photonics knowledge will benefit research and industry on both sides of the Atlantic, say partners. 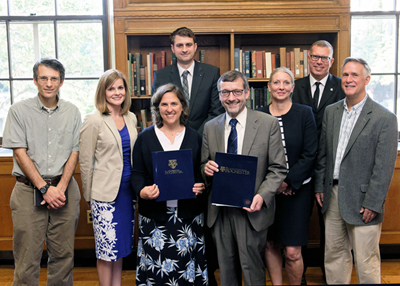 Recommitting their vows: Rochester and Jena believe they are stronger together.

With the signing of a Memorandum of Understanding in mid-September in Rochester, NY, a partnership between the world’s two leading regions of optics innovation was taken to a new level. The partners are saying that the well-established exchange of photonics knowledge and techniques will be strengthened, and research and industry on both sides of the Atlantic is set to profit.

The sister cities of Jena and Rochester have a lot in common: in both, an optics industry has been developed since the 19th century together with academic prowess and food chain of supplier companies.

While in Jena the collaboration between Carl Zeiss and Ernst Abbe significantly furthered optics research, soon afterward in Rochester, local industrialists George Eastman (Eastman Kodak) and Edward Bausch (Bausch & Lomb) founded an optics institute at the university. Since then there have been many changes. Today, both regions are enormously strong locations for the optical industry and research.

On the German side, the initiatives of the Friedrich-Schiller-University, Jena, the Fraunhofer Institute for Applied Optics as well as the Thuringian Optonet Photonics Network will be sustained. And on the American side are the University of Rochester and the Rochester Regional Photonics Cluster of local New York Photonics Network, which last month attended a separate development meeting.

For the academics involved, a number of concrete projects are already lined up: there will be a student exchange as part of the ERASMUS Program and scientists from each side will hold guest lectures. Supported by the BMBF Program for International Cooperation, development projects between research institutes and companies on both sides are planned.

The establishment of a joint conference is also being worked towards, say the partners. A starting point for this was the Jena OptoNet Workshop on “Ultra Precision Manufacturing”, also in September, which hosted 150 experts from across the world. To mark the start of the new partnership, Jena gave its American partners a present: they built a computer-generated hologram as an exhibit for the Rochester Museum and Science Center, which depicts Jena’s distinctive skyline, including the famous Carl Zeiss Tower.

FSU Professor Dr. Andreas Tünnermann, director of Fraunhofer IOF and leader of the Institute for Applied Optics, commented of the initiative, “Through close networking between the Photonics Center of Excellence in Jena and the optics players in Rochester in terms of research and education, the innovation in both locations will be significantly strengthened. This should create the basis for new products, in particular for market information and communication as well as mobility and production.”