Israeli company is working on depth sensors featuring optical nano-antennas that it says will outperform lidar and radar systems. 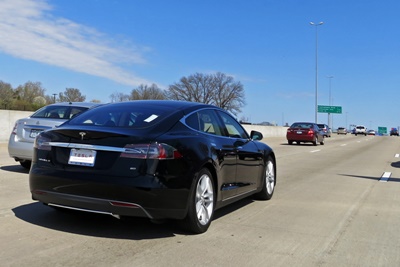 Oryx Vision, an Israeli company developing a new kind of photonic sensor technology allowing autonomous vehicles to “see” better, says it has raised $17 million in a series A funding round.

Set up by former Vishay Intertechnology executive David Ben Bassat in 2009, the Petach Tikva outfit believes that its nano-antenna-based technology, which operates in the far-infrared spectrum, will outperform the various camera, radar, and lidar options implemented in today’s early autonomous and semi-autonomous vehicles.

“Autonomous vehicles need much more powerful depth sensing capabilities than what was originally thought; existing technologies simply cannot deliver them. We have taken a completely different approach to artificial depth sensing and managed to create a solution that will truly enable autonomous driving.”

More specifically, the Israeli firm claims that lidar systems have an inherent weakness in bright sunlight, and will not be able to perform with the kind of range needed for the vehicles under development at the likes of Google, Ford, Mercedes, Volvo and many other blue-chip names.

Recent months have seen hundreds of millions of dollars of venture and corporate investment flow into key automotive lidar developers and related start-ups. Velodyne and Quanergy have respectively attracted equity interest from Ford and the car parts giant Delphi, among others. Ford has set itself a target of mass producing a fully autonomous vehicle by 2021.

While Quanergy says that its “puck” sensors have a range of “up to” 200 meters, Oryx is of the opinion that sunlight can still create real problems. On its web site, the firm states:

“To drive independently, autonomous vehicles will need great eyesight. Really great. They’ll have to identify tire debris on the asphalt 80 meters away just as well as a motorcycle crossing a road 150 meters ahead.

“And they’ll have to do it in the middle of the night or facing blinding direct sunlight. Such real life demands translate to performance requirements that no existing technology, including any lidar or radar, can meet.”

Terahertz solution?
Oryx’s solution is to use new nano-antennas that operate in the far-infrared spectral region, with the company saying that the approach is able to detect tiny objects from 150 meters, and work in the dark and extreme weather conditions.

The company says it has already demonstrated the technology and discussed its implementation with some of the world's leading car manufacturers, as well as top-tier automotive suppliers.

Founder Bassat, who worked for the Israel Defense Forces before starting up the wireless transceiver chipset company RF Waves in 1999 and selling it to Vishay five years later, has filed various patents describing antenna elements operating in the terahertz spectrum.

He had raised around $300,000 in angel investment since founding Oryx, before CEO Wellingstein joined the firm after selling his own start-up, the network optimization software company Intucell, to Cisco for a cool $475 million in early 2013.

Oryx says that it will use the new funding round, which was led by US-based Bessemer Venture Partners and included contributions from Maniv Mobility and Truck Venture Capital, to accelerate its expansion. Bessemer partner Adam Fisher has joined the Oryx board of directors following the deal.

The fabless company is currently looking to recruit a number of key personnel, including directors of operations and process, as well as a senior antenna designer.