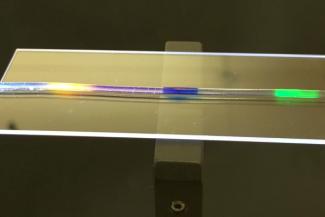 Hydrogels are attractive materials for use in medical applications thanks to their inert chemical nature and biocompatibility, but most varieties to date have tended to be brittle and weak.

Researchers from MIT and Harvard Medical School have now developed a highly stretchable hydrogel said to be as flexible as a rope of licorice, and formed it into fibers robust enough to survive implantation into the body. The work was published in Advanced Materials.

Careful design of the hydrogel allows it to function as an optical fiber for delivery of therapeutic light pulses to particular sites, while incorporation of functional molecules such as organic dyes can produce an optical sensor perhaps able to monitor the progress of disease.

Xuanhe Zhao of MIT Department of Mechanical Engineering said that the new material might readily prove attractive in optogenetics, which relies upon the action of light on targeted neurons. Optogenetics studies of the brain, for example, currently use rigid optical fibers inserted into the tissues, but the hydrogel may offer a less invasive solution.

"The brain is like a bowl of Jell-O, and the conventional fibers currently used are very rigid, which can possibly damage brain tissues," said Zhao. "If hydrogel fibers could match the flexibility and softness of the brain, they could provide more effective stimulation and long-term therapy."

Zhao’s group at MIT specializes in fine tuning the mechanical properties of hydrogels, having previously devised ways to bond them with various surfaces such as metallic sensors and LEDs, creating stretchable electronics.

A conversation with Seok-Hyun (Andy) Yun of Harvard's bio-optics group opened the door to using them as optical fibers, since Yun had previously fabricated a hydrogel able to transmit light effectively, but which proved to be too brittle for real-world use.

Biocompatible sensors
From that meeting of minds came a design in which optically optimized alginate-polyacrylamide materials are formed into a central core surrounded by outer cladding. Careful control of the mechanical properties allows the fibers to be elongated to an axial strain of 700 percent and then relaxed over multiple cycles, while total internal reflectance at the interface of the core and the cladding guides light along the fiber.

One valuable result could be a biocompatible sensor able to react to being stretched - potentially an implantable or wearable strain gauge.

The group tested this concept by loading a fiber with red, green, and blue organic dyes at specific regions along its length. Stretching the fiber at different points while laser light was transmitted through it duly changed the amount of light absorbed or scattered at that location, altering the spectrum of light ultimately received at the end of the fiber - a change in red intensity indicating physical stress at the location of the red dye, for example.

The team commented that this could lead to stretchable, strain-sensing optical fibers implanted along the length of a patient's arm or leg, to monitor for signs of improving mobility, or to sensors able to light up in response to signs of disease.

"We may be able to use optical fibers for long-term diagnostics, to optically monitor tumors or inflammation," said Zhao. "The applications can be impactful."