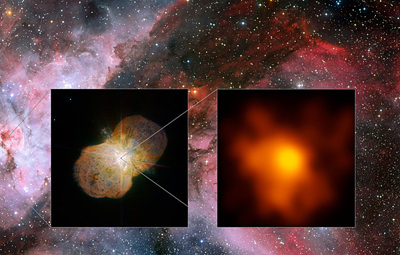 An international team of astronomers have used the European Southern Observatory’s Very Large Telescope Interferometer, at the Paranal Observatory in Chile, to image the Eta Carinae star system in the greatest detail ever achieved.

They have reported finding “new and unexpected structures” within the binary system, including in the area between the two stars where extremely high velocity stellar winds are colliding.

The team, led by Prof. Gerd Weigelt from the Max Planck Institute for Radio Astronomy (MPIfR) in Bonn, Germany, commented, “These new insights into this enigmatic star system could lead to a better understanding of the evolution of very massive stars.”

This colossal binary system consists of two massive stars orbiting each other and is very active, producing stellar winds which travel at velocities of up to ten million kilometers per hour. The zone between the two stars where the winds from each collide is very turbulent, but until now it could not be studied.

Eta Carinae, a star system in the Carina Nebula, is of major interest as it is widely-regarded as the candidate to become the next Super Nova in our galaxy, the Milky Way.

The power of the Eta Carinae binary pair creates dramatic phenomena. For example, a “great eruption in the system” was observed by astronomers in the 1830s. Modern astronomers now know that this was caused by the larger star of the pair expelling huge amounts of gas and dust in a short time, which led to the distinctive lobes, known as the Homunculus Nebula, which is still visible today. The combined effect of the two stellar winds as they smash into each other at extreme speeds is to create temperatures of millions of degrees and intense deluges of X-ray radiation.

The central area where the winds collide is so comparatively tiny — a thousand times smaller than the Homunculus Nebula — that telescopes in space and on the ground so far have not been able to image them in detail. The team has now utilized the powerful resolving ability of the VLTI instrument AMBER to peer into this violent realm for the first time.

An ingenious combination — an interferometer and three of the four Auxiliary Telescopes at the VLT — has led to a tenfold increase in resolving power in comparison to a single VLT Unit Telescope. This delivered what Prof. Weigelt calls "the sharpest ever image of the system and yielded unexpected results about its internal structures."

The new VLTI image clearly depicts the structure that exists between the two Eta Carinae-stars (see above image). An unexpected fan-shaped structure was observed where the raging wind from the smaller, hotter star crashes into the denser wind from the larger of the pair.

“Our dreams came true, because we can now get extremely sharp images in the infrared," said Prof. Weigelt. "The VLTI provides us with a unique opportunity to improve our physical understanding of Eta Carinae and many other key objects.”

In addition to the imaging, the spectral observations of the collision zone made it possible to measure the velocities of the intense stellar winds. Using these velocities, the team of astronomers were able to produce more accurate computer models of the internal structure of this fascinating stellar system, which will help increase our understanding of how these kind of extremely high mass stars lose mass as they evolve.

Measurements were done using the Doppler effect. Astronomers use these frequency shifts to calculate precisely how fast stars and other astronomical objects move toward or away from Earth. The movement of an object towards or away from us causes a slight shift in its spectral lines. The velocity of the motion can then be calculated from this shift.

Team member Dieter Schertl of MPIfR commented, “The new VLTI instruments known as Gravity and Matisse will allow us to get interferometric images with even higher precision and over a wider wavelength range. This wide wavelength range is needed to derive the physical properties of many astronomical objects.”