Despite posting an annual operating loss of £12.5M, the UK maker of cadmium-free quantum dots senses a major opportunity unfolding. 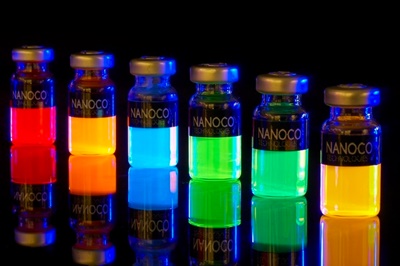 Nanoco Technologies, the UK developer of fluorescent cadmium-free quantum dot (CFQD) material expected to find widespread use in the display sector in the next few years, has revealed an operating loss of £12.5 million for its latest financial year – on revenues of only £0.5 million.

However, the University of Manchester spin-out company remains strongly upbeat, with its stock price rising in value following an investor call, and partially reversing a recent slump.

Scaling up
The past year has seen CEO Michael Edelman and his executive team renegotiate what had been an exclusive licensing deal with Dow Chemical to scale CFQD production for display applications at the chemicals giant’s dedicated manufacturing facility in Cheonan, Korea.

Since switching to a less immediately lucrative non-exclusive agreement with Dow back in March, Nanoco has signed up to similar deals with German chemicals firm Merck and Taiwan-based Wah Hong Industrial, which makes optical films used in TV displays.

Edelman wrote in his review of the year to July 31: “The new licensing strategy has given us greater control and is allowing us to increase the pace of commercialization in display.”

With improvements to production processes, the CEO added that yields and manufacturing capacity at the firm’s own site in Runcorn, near Manchester, had increased “substantially”, alongside better CFQD optical performance. Current production levels remain very low, but now that Dow is also scaling up, with Merck to follow suit, global production of the material looks set to boom.

Edelman said that Dow remained committed to commercializing Nanoco’s technology, which it is marketing under the “TREVISTA” brand name.

“Dow has received increased sample requests over the past few months for TREVISTA cadmium-free quantum dots, which are being fulfilled exclusively from Dow's Cheonan facility,” remarked the CEO. “In parallel, the application of Nanoco's improved manufacturing processes to Dow continues to progress.”

Exciting times
The CEO told investors that the latest financial year represented one of “transformation” for the company, adding: “We begin the current year with considerable excitement.”

While the hefty losses in the latest year might be a concern for some, Edelman pointed to market analyst expectations of an explosion in demand for CFQDs across display applications. Quoting predictions by analysts at IHS that around 19 million quantum-dot televisions will ship in 2019, he said:

“If we look at the predicted breakdown between cadmium and cadmium-free [QDs], cadmium-free absolutely dominates. It dominates today, and will continue to dominate going forward.”

Edelman added that key “Western-facing” brands, including Samsung, Apple and LG, had all declared that they would not use cadmium, and are focused on the cadmium-free approach – although on the other side of the argument 3M remains very much in favor of negotiating an exemption from any cadmium bans. The firm is partnered with California-based Nanosys on a cadmium-containing QD product for LCD TV enhancement.

Referring to some ongoing confusion between the European Commission (EC) and the European Parliament over the net benefits of CFQD technology versus cadmium-containing QDs, the CEO said:

“I think, irrespective of the RoHS [the EC’s Restrictions on Hazardous Substances regulations] and the European sideshow, cadmium's life is very, very limited. It's just a question of time.” With the EC still consulting on the topic within the various European member states, Edelman claimed that the majority of countries had decided in favor of a cadmium ban, although key player Germany was yet to reveal its stance.

“The only players today entertaining cadmium are some of the Chinese OEMs,” he said. “And even in China they have their five-year plan, where they are working to try and clean up the environment.”

Merck’s market share
Edelman also referred to the failure of Samsung and LG to make much headway in even the high-end TV market with their organic LED (OLED) display technology.

“OLED still hasn't taken off,” he said. “And the color performance of quantum dot-based TVs is superior to that of OLED TVs.”

The CEO added that makers of still-dominant LCD displays had worked hard over the years to “destroy” the initial technological advantages enjoyed by OLEDs – largely ultra-thin designs and impressive color reproduction - and would continue to do so.

The latest way to do that appears to be with QDs, and Nanoco’s relationship with Merck looks to be highly significant – the German firm is believed to make as much as 70 per cent of all the liquid crystal material used in LCDs globally.

Merck’s deal largely involves up-front and milestone payments to Nanoco, but with the German firm yet to ramp production, the two have agreed a “jump-start” program to get into the market more quickly by purchasing CFQD resin from the UK company.

“They are very, very keen to get started sampling their customers,” Edelman said, starting with material made by Nanoco. “They are moving very quickly. The technology transfer process is happening very smoothly.”

He adds that trial runs in German are already under way, with Merck in the process of deciding whether to scale up its own CFQD production at its Darmstadt headquarters, or at alternative sites in the US and Japan.

Cash reserves
Meanwhile, Nanoco’s licensing deal with Wah Hong is structured to generate cash from both sales of the resin containing CFQDs, and a royalty payment on sales of the CFQD films to TV assemblers. Wah Hong produces the films by first extruding Nanoco’s resin, and Edelman expects this business to begin ramping imminently.

With sales from CFQD production at Nanoco’s Runcorn site set to rise, and Dow and Merck in the near future, the UK company's revenues should be about to do the same. Nanoco’s cash reserves currently stand at £14.5 million, and Edelman said that the firm was “in a great place”. Negotiations with another potential licensing partner are in progress, while similar deals to that between Nanoco and Wah Hong are being explored by Dow and Merck.

However, the CEO remained tight-lipped when asked exactly how soon TVs containing Nanoco’s CFQDs would be on sale. “I can't give you a specific answer,” Edelman responded when asked by an investment analyst directly.

Something he did comment on was the ongoing legal battle between rivals QD Vision and Nanosys, which Edelman believes to be rapidly draining the much-needed cash reserves of both.

"It's sucking a lot of cash from both those companies," he said. "We estimate it's up to $1 million [per] month. QD Vision don't have any cash. Nanosys have limited cash."

With the judge in California recently ordering Nanosys to scale back its 400-claim, 13-patent suit, the spiraling expense of the legal spat appears totally unjustified - given that that Nanosys is unlikely to receive much in the way of damages relating to lost revenues, even if it wins.

"They must be trying to do something else," Edelman mused. "Or they expected QD Vision to roll over very quickly, which they didn't."