University of Leicester says new technique can reduce the need for animal testing in biomedical research.

Researchers at the University of Leicester, UK, have developed a new photonics-based approach for analyzing toxic chemicals in complex samples that mimics the way mammals smell and taste.

The scientists say that the technique could reduce the need for testing on laboratory animals in biomedical research and other areas of chemical testing. In the study, recently published in Nature’s Scientific Reports, a fluorescent assay combines a mixture of environmental-sensitive fluorescent dyes and human skin cells that generate fluorescence spectra patterns distinctive for particular physiological conditions. 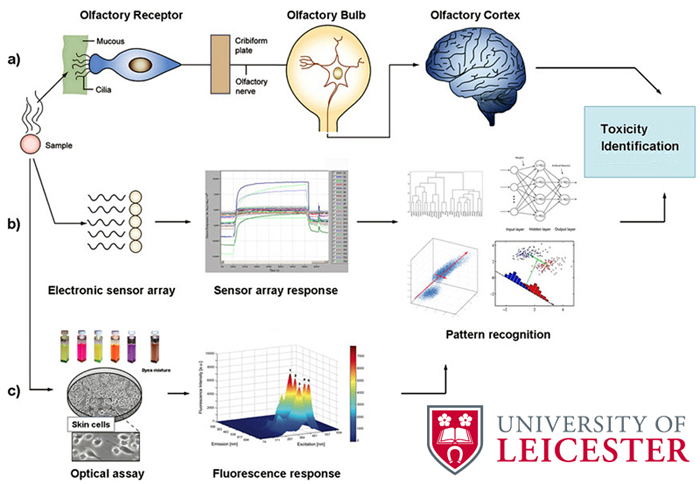 The study was inspired by the operating principle of the “electronic noses and tongues” systems, which mimic mammalian smell and taste recognition, combining semi-specific sensors and chemometric techniques for monitoring biochemical processes.

The Leicester Biotechnology Group at the university has used similar principles, replacing electronic sensors with dyes arrays and adapted them with human cells. This combination has allowed transforming complex fluorescent spectra into a simple answer – whether a chemical compound is toxic or not.

While a digitized fluorescence image is a very high-dimensional vector – each features more than 250,000 numbers – the number of tested chemicals is much less.

The researchers suggest the dimensionality reduction is the first task to overcome, with the challenge being how to transform the high dimension signal to a much lower dimension while keeping all important information safe.

Alexander Gorban, Professor of Applied Mathematics at Leicester, said, “Firstly, we represented each signal by its projections on other signals. Secondly, we applied the classical and very popular model reduction method, Principal Component Analysis, and found five main components of the signals.

“Then we used dozens of various linear and nonlinear data analysis methods for the five-dimensional signals and validate the classifiers on the previously unseen data. Our approach can be considered as ‘explicit deep learning’, an explicit version of widely-popularized, implicit deep learning algorithms.”

The results have shown high accuracy, with both specificity and sensitivity above 90 per cent.

Sergey Piletsky, Professor of Bioanalytical Chemistry, commented, “The latest finding is a big step not only in toxicology, providing a modern, inexpensive and more efficient in vitro method, but also in the development of sensor assays for rapid quantification of a wide range of analytes, which has always been a great challenge faced by analytical scientists.

“This process can also reduce the need for laboratory animals in biomedical research, pharmaceutical industry, other areas of chemical testing and health diagnostics.”

The research is supported by the Dr Hadwen Trust, which supports non-animal medical research.

The Scientific Reports paper, entitled, “Fluorescence-based assay as a new screening tool for toxic chemicals”, concludes: “Our results demonstrated that the optical assay can be successfully integrated with cell cultures and the physicochemical changes produced by cells in the contact with different compounds reflected in the changes of fluorescent pattern of dyes. This approach has several important advantages compared with traditional biochemical assays, such as lower cost, short time of measurements, high sensitivity and reproducibility.

”The major benefits of this technique also include the possibility of developing an automatic system to screen large number of samples quickly and efficiently, and to decipher molecular mechanisms of toxic action. It can be employed in high-throughput screening, in particular in safety assessment of drugs, cosmetics, specific ingredients and provide alternative screening tool in medical research, pharmaceutical industry and other areas of chemical testing.”