Research-level, dual-junction device features sub-cells made in Switzerland and the US and then stacked mechanically. 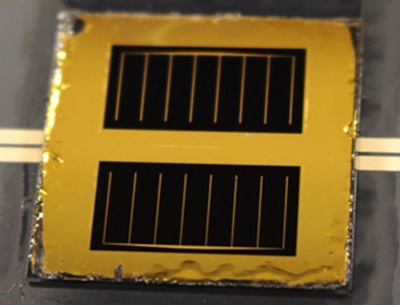 A team of scientists based at the US National Renewable Energy Laboratory (NREL) and the Swiss Center for Electronics and Microtechnology (CSEM) have set a new world record for a mechanically stacked solar cell.

The 1 cm2 dual-junction device features a gallium indium phosphide (GaInP) sub-cell developed by the NREL end of the team, on top of a crystalline silicon sub-cell made by the Swiss collaborators.

Its certified conversion efficiency of 29.8 per cent represents a record for a mechanically stacked device without concentration, and compares with the records of 25.6 per cent for a crystalline silicon device, and 20.8 per cent for a single-junction device based on GaInP.

Record review
Those figures were all reported in a recent journal paper that highlights the huge number of sub-categories for which “world record” solar efficiency performances can be claimed. Renowned PV cell researcher Martin Green, from the University of New South Wales, was the lead author on that latest review of the field, published in Progress in Photovoltaics.

The paper also serves as a reminder that efficiency is only one part of the story. The very highest certified efficiency performance remains the 46 per cent for a multi-junction cell under 500-sun concentration, set by a Soitec-led team in 2014. However, Soitec has since exited the concentrated photovoltaics (CPV) business.

David Young, a senior researcher at NREL who worked on the latest project, said of the stacked device: “It’s a record within this mechanically stacked category. The performance of the dual-junction device exceeded the theoretical limit of 29.4 percent for crystalline silicon solar cells."

Although the NREL-CSEM device features in the Green-authored review, full details have not yet been revealed. Young has co-authored a paper entitled Realization of GaInP/Si dual-junction solar cells with 29.8 percent one-sun efficiency submitted for publication in the IEEE Journal of Photovoltaics.

Transatlantic tandem cell
The transatlantic collaboration was sparked when another NREL scientist, Stephanie Essig, attracted interest from CSEM when she presented details of the NREL team’s work on tandem solar cells at the 5th International Conference on Silicon Photovoltaics, held in Germany last March.

Matthieu Despeisse, who leads crystalline silicon activities at CSEM, said: "CSEM partnered with the NREL scientists with the objective to demonstrate that 30 percent efficient tandem cells can be realized using silicon heterojunction bottom cells, thanks to the combination with high-performance top cells such as those developed by NREL.”

The record was set with a new design, and the collaborators suggest that even higher efficiencies could be achieved in the future.

In their review article, Green and colleagues listed the various records for different designs and materials, as well as other exceptional performances, across four different categories.

Along with the NREL-CSEM result, the newest entries in the list include the 15.6 per cent result for a small lead-based perovskite cell fabricated at the National Institute of Materials Science, Tsukuba, Japan.

In terms of more commercially oriented products, the best performance for a large-area silicon crystalline module currently stands at 22.8 per cent, and was set by California-based SunPower in June 2015.

In comparison, Trina Solar set a new best of 19.2 per cent for a large multicrystalline silicon module, while First Solar’s 18.6 per cent result over a somewhat smaller CdTe module represents the best effort so far with thin-film PV technology.