Photonics researchers in Australia are developing a new kind of fiber-optic sensor that they believe will find use monitoring early-stage embryos during the in vitro fertilization (IVF) process.

The new probe, detailed in a research paper published in the journal Sensors, is able to measure hydrogen peroxide and pH levels simultaneously.

It consists of a single optical fiber with a tip coated in two fluorescent materials. Malcolm Purdey, who led the research effort at the ARC Centre of Excellence for Nanoscale BioPhotonics (CNBP) and the University of Adelaide, says that while the sensor could be used in a variety of biological applications, it is particularly well suited to IVF.

“Unregulated production of hydrogen peroxide by an embryo, as well as fluctuating levels of pH, can indicate embryonic stress, impacting embryo development,” he explained.

“Our state-of-the-art sensor is a single strand of optical fiber that is completely non-invasive. It could be placed right next to the embryo, causing no disruption to its development, monitoring critical stages of the IVF process.”

Blue LED; green laser
In their paper, the research team report that two fluorophores are embedded into a polyacrylamide matrix on the tip of the probe. In the conclusion they write: “The probe is demonstrated to effectively detect hydrogen peroxide over a physiological pH range.”

The probe employs blue light from an LED to measure peroxide and green excitation from a 532 nm laser to sense pH, with the team reporting “minimal cross-talk”. They showed a minimum detectable concentration of 50 μM peroxide at a pH of 7.5, while pH could be measured repeatedly over the range 6.5-8.5 with a resolution of 0.1 pH units.

Diagnostic potential
At the moment the resolution of the sensor is around 200 µm – although Purdey and colleagues suggest that this could be improved to only a few microns by tapering the fiber’s tip.

According to Purdey, the techniques currently used to monitor the health of an embryo are far from perfect.

“Current clinical examinations are solely visually based,” he said. “Even recent prototype sensors would need multiple fibers, detectors and light sources to be hooked up.” 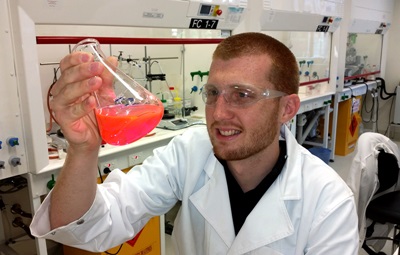 In contrast, Purdey points out, the ARC team’s dual sensor has the potential to monitor multiple embryonic parameters objectively, with a single piece of technology. “We’ll be able to better understand the dynamic processes taking place, at this, the very earliest stage of life.”

As well as the potential IVF application, monitoring hydrogen peroxide levels is of wide importance because it can indicate cell stress and possible illness. “In the future, our sensor could be used inside of the body, to examine cells in the arteries to look for evidence of vascular disease,” predicts Purdey. “It could also be used to aid cancer detection.”