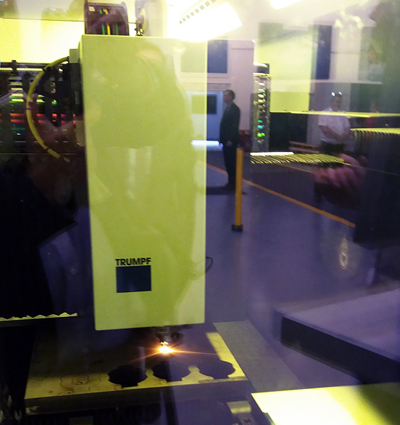 Trumpf UK has announced a range of laser-based materials processing tools including an 8kW fiber laser-based steel cutter, which are new to the UK market, as well as several customer wins and an update on the company’s view of market. The company’s new managing director Annette Doyle hosted the event at Trumpf’s Luton headquarters, which involved the first UK demonstration of laser cutting of 50mm stainless steel.

TruLaser 5030 fiber The highlight of the new system launches was the TruLaser 5030 fiber integrated with TruDisk 8001 – the first 2D laser machine to provide 8kW of laser power. Its fiber-guided solid state laser and dynamic drives enables the operator to achieve optimum productivity across the whole sheet thickness.

The 5030’s cutting results are based on the BrightLine fiber, Trumpf-developed technology that allows users to change from “highly productive thin” to “high quality thick” sheet processing on a single machine. On the TruLaser 5030 fiber 8kW, this capability is complemented by a range of functions including CoolLine (selective workpiece cooling) and PierceLine, which enables smaller contours to be cut.

TruLaser 2030 fiber Also making its debut in the UK is the TruLaser 2030 fiber, a 2D laser cutting system, which is said to “combines the advantages of a compact unit with the power of a higher series of machine”. This processing machine is powered by the TruDisk solid-state laser, to rapidly cut thin sheet metal, in particular. Functions such as its single cutting-head design and an optional nozzle changer achieve shorter non-productive periods, says Trumpf. 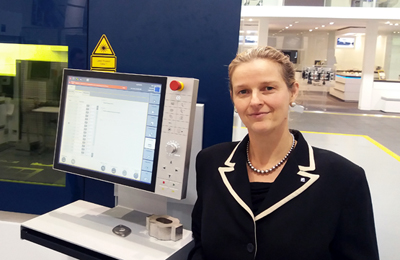 Considering market conditions, Annette Doyle agreed that certain sectors of the global industrial market were challenging at the moment: “Clearly, anything connected with the oil industry is problematic and there is not too much ordering there. Steel-making also looks uncertain, although that in itself is not a large market for Trumpf.

"At the job shop level there is optimism, across all sorts of application areas. For example, punching – which has been declared dead so many times before – is still one of our strongest areas. At Trumpf, we are seeing a lot of strong interest across all of our machines, at the moment.”

Doyle emphasized that Trumpf is embracing top-to-bottom industry developments, such as the Industry 4.0 approach, which takes a holistic approach to process, rather than focusing on individual machine performances.

”When we look at efficiency, we need to look at more than just which machine cuts fastest, although Trumpf has always been ahead in that race. But that is not the big picture, which is the inclusion of preparation time and adoption of lean manufacturing processes. We want to be involved with the whole customer process, which is where a development like TruConnect becomes very important.

She explained, “TruConnect allows Trumpf machines to be integrated in an automated, internet-based production environment. It is a framework that allows users to create a smart factory that meets their own specific needs. That’s the context – what we have previously done for machines we are now doing for the whole industrial process.” 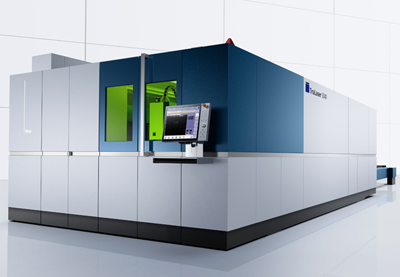 Ordered in response to AK’s ongoing demand for thicker cut stainless steel plate, the machine is due for installation in February 2016. The “fast-growing” AK Stainless (founded in 2003) offers a laser steel cutting service as well as assisting with customers’ product design, planning and delivery across the UK.

AK has operated a structured program of continuous investment in the CNC laser profiling technology, with several Trumpf system installations in recent years. Last year, an earlier version of the TruLaser 5040 fiber was added to a trio of TruLaser CO2 laser cutting machines.

“We are experiencing continued demand for thicker cut plate, particularly from heavy engineering sectors such as nuclear,” said Managing Director, Tony Baron. “The 8kW laser power and Trumpf BrightLine fiber technology will mean that the higher speed associated with using fiber laser technology on thin sheet is also achievable on plate up to 40mm thick.”