Photonics PPP picks up the pace

Latest projects funded under the Photonics21 public-private partnership show the scope of the initiative's ambitions. 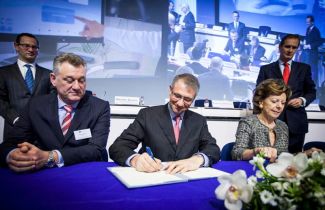 The signing of a public-private partnership (PPP) agreement between the European Commission (EC) and the Photonics21 technology platform in late 2013 marked the start of a new phase in the Continent's photonics development road-map; and the shape of that map is now starting to become clearer.

A primary goal, as announced at the PPP's creation, is to facilitate more effective development and better targeted funding, at a time when Europe's economies remain under pressure.

In total, the PPP envisaged directing €3.5 billion towards near-market photonics technology, under the overall umbrella of the EC's Horizon 2020 research and innovation framework program.

Since then, those good intentions have needed to navigate Europe's wider economic currents, notably the impact of changes to the EC budget set by Commission president Jean-Claude Juncker. But with the recent completion of 2015's funding calls, the portfolio of research to be funded under the PPP has taken shape.

Figures from Photonics21 indicate that a total of 51 Photonics PPP projects have been selected for support after the funding calls of 2014 and 2015. Of these, 42 projects are described as relating specifically to photonics technologies, and the remaining nine to organic electronics.

In financial terms, the Photonics PPP now directs €163 million of funding into photonics projects, including €14 million under the Factories Of The Future call - an initiative relating directly to high-added-value manufacturing technologies. The organic electronics projects account for a further €37 million.

The majority of projects are funded under either Horizon 2020's Research and Innovation Actions, aimed at leading to the development of new knowledge or a new technology; or under Innovation Actions, which are focused on closer-to-market activities.

The average EC contribution to either action is intended to fall between €2 million and €5 million, according to Horizon 2020 information, although the Photonics PPP is also contributing to broader projects with larger overall budgets.

Some of the PPP projects now under way in selected headline areas include:

• Photonics projects, including those based on its role as a designated Key Enabling technology (KET):

CHEQUERS, a project to develop hand-held and tripod-mounted instruments based on active hyper-spectral imaging as a means to detect explosives, toxins, or other hazardous materials. Coordinator: KITE Innovation (Europe).

• Photonics-based projects with larger budgets, to which the PPP is contributing, include:

PhotonicSensing, funded under the ERA-NET Cofund action, will implement a trans-national call for project proposals in the area of photonic sensing, and strengthen research and development in five key areas of photonic-based sensors. Coordinator: Austrian Research Promotion Agency (FFG).

CARDIS (Cardio Vascular Disease Detection with Integrated Silicon Photonics), intends to demonstrate a mobile, low-cost device based on a silicon photonics-integrated laser Doppler vibrometer. As previously reported on Optics.org, the technology could be valuable for the screening of arterial stiffness, and detection of stenosis and heart failure. Coordinator: Imec.

SAPHELY, from "self-amplified photonic biosensing platform," focuses on the development and pre-clinical validation of a nanophotonic-based handheld point-of-care device for the early diagnosis of diseases, with cancer a particular target. Coordinator: Polytechnic University of Valencia (UPV).

RAIS will tackle the growing problem of sepsis through a new label-free microarray platform intended to quantify the levels of specific sepsis biomarkers. It will employ a novel interferometric technique and should ultimately be capable of providing large arrays of tests. Coordinator: ICFO.

OCTCHIP, coordinated by the Medical University of Vienna, will demonstrate a compact low-cost OCT system operating at 840 nm for point-of-care diagnosis of eye diseases. The aim is to integrate most of the optics and electronics on a silicon-nitride waveguide-based photonic integrated circuit.

Factories of the Future:

ADALAM is developing an adaptive laser micro-machining system, based on ultra-short-pulsed laser ablation and a novel depth measurement sensor. The goal is to improve the performance of adaptive micro-milling operations and defect detection systems, and assist with complex tool manufacture. Coordinator: Unimetrik.

RADICLE aims to create a real-time dynamic control system for laser welding operations, using application-specific sensors in combination with intelligent and predictive control technologies. Reduced defects in welding operations across a range of materials and geometries in several industrial sectors could be the result. Coordinator: Manufacturing Technology Centre (MTC).