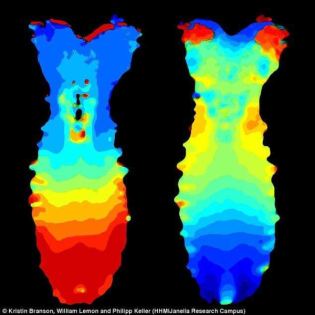 Non-invasive live imaging of activity across networks of neurons has benefited greatly from recent advances in both neurogenetics and microscopy, and images gathered across substantial tissue volumes have become increasingly feasible.

This in turn has opened up the tantalizing prospect of recording all activity within a whole central nervous system (CNS) during different behaviors, and mapping the functional connections between different CNS regions.

However, the technical challenges have proven to be formidable; and whole-CNS functional imaging has to date been limited to examination of the brains of the simplest transparent specimens.

One key problem has been the need for an imaging method able to track neural activity fast enough for the data to be physiologically relevant, and do so across suitably large areas at high resolution.

A team at the Howard Hughes Medical Institute (HHMI) Janelia Research Campus has now developed a microscopy platform that seems able to do just that, and applied it to the CNS of the larval fruit fly Drosophila melanogaster. The results were published in Nature Communications.

The new method is based on light-sheet microscopy, in which a thin planar sheet of laser light is used for illumination in fluorescence microscopy and scanned across the required sample volumes - an approach known to be effective for observing neuron populations, avoiding some of the difficulties of toxicity and irradiation intensity involved in some high- and super-resolution microscopy methods.

Earlier work at Janelia led to the development of simultaneous multi-view (or SiMView) light-sheet microscopy, which uses four optical arms: two each for excitation and detection. This can record four simultaneous data sets in either single-photon or multiphoton modes.

But this is still too slow for authentic whole-CNS imaging. "The existing SiMView technique is fast; but not fast enough for this," commented Philipp Keller of HHMI.

So the team took SiMView microscopy a step further, by making improvements across the board - to the microscope design, control, and data-handling functions.

"It's much simpler to adjust the optics than to move a very fragile biological specimen carefully prepared or embedded in a supporting matrix," Keller commented. "This isn't really reinventing the microscope; but rather trying to push the temporal resolution to the maximum."

Even so, the new approach turned out to be challenging, given the need for piezos able to provide the short travel range required while being protected from added load involved. In practice this ruled out commercially available positioning technology altogether, and required the team to develop its own customized four-axis system capable of achieving the micron-accuracy volume matching that was involved.

This in turn required a method of controlling the microscope alignment in order to guarantee an optimal overlap between the four focal plains and light sheets involved, along with a functional image assay able to use two-photon excitation, complementing the high-speed imaging possible from the system operating in its one-photon mode.

In combination, these developments led to a working hs-SiMView microscopy platform providing multi-view functional imaging of a 500x200x200 micron volume, imaged at 5 Hz with one-photon excitation and at 2 Hz with two-photon excitation. The team believes this to be around twenty-five-times faster than imaging of similar specimens in earlier light-sheet microscopes - although even this figure could be a conservative estimate of the improvement, according to Keller.

Such speeds place stringent demands on other aspects of the platform, notably the detection system which represents a potential bottleneck in the analysis. Next-generation CMOS sensors should soon help to tackle that issue.

The other challenge is dealing with the data. "In principle this regime yields data at up to 2 gigabytes per second, and improved detectors are probably going to increase this even further," noted Keller. "So the computational back-end processing is going to become increasingly important.

Large and in vivo
The technique has so far been applied to Drosophila CNS explants - the functioning nervous system, but removed from the living organism. This avoids some of the optical challenges and means the sample is relatively stationary. However, the obvious goal is to apply hs-SiMView to in vivo analysis of larger samples.

Such whole-animal functional imaging would give researchers the opportunity to be more than passive observers, and initiate certain processes in the nervous system in order to image how they are being executed - although introducing a means of stimulating the sample into the already complex experimental set-up may prove tricky.

The size of the specimen is another obvious factor. Depending on the exact conditions, the technique can achieve single-cell resolution of the nervous system up to about second instar larval stage; but beyond that the specimen is so large that even with two views from opposite sides it becomes difficult to separate cells that are close to each other deep within the target.

"We are currently working on a new generation of microscopes that can tackle these challenges," noted Keller. "We want to pair up the fine control we have over the imaging side with optical subsystems offering equivalent spatial and temporal resolution. This would open up a wide spectrum of interesting experiments in neuroscience, allowing us to probe quite complex behavior sequences."

Other advanced microscopy techniques might well have roles to play in tandem. Combinations of light-sheet microscopy and the parallel field of structured illumination microscopy could prove to be particularly powerful for larger animals.

"The challenges we face with large specimens are a bit different from those involved in super-resolution imaging of fast cellular or sub-cellular processes," commented Keller.

"Most approaches to enhanced resolution fail if applied to large specimens, since they rely on wavefront control over multiple beams of light. As soon as you lose this control, you can't leverage the resolution-enhancement principle behind it. I see light-sheet microscopy as a great starting point for these experiments and very powerful in combination with complementary methods - although other techniques may yet surpass it in certain areas."