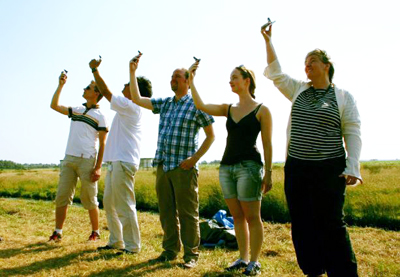 The Dutch iSPEX-project performing atmospheric measurements in the Netherlands.

The successful Dutch-based iSPEX atmospheric research project, which enlisted the general public to contribute to the understanding of air pollution is being scaled up and extended to a Europe-wide citizen campaign: iSPEX-EU. From 1 September to 15 October 2015, thousands of citizens in major European cities are taking to their streets, squares and parks to measure air pollution using the optical systems and app-based software in their smartphones. Participating cities include: Athens, Barcelona, Belgrade, Berlin, Copenhagen, London, Manchester, Milan, and Rome.

iSPEX-EU distributes small devices that can be attached to smartphones to adapt them into optical sensors. These add-ons are “spectropolarimeters” that, in combination with the phone’s camera, sensors, computing and communications capabilities can measure tiny particles in the atmosphere.

These particles can be of natural origin, such as sea salt or tiny ash particles from forest fires or volcanic eruptions, to human-made soot particles from traffic and industry. They all contribute to air pollution and its impact on our environment and health in an as-yet poorly understood way. Atmospheric dust forms one of the largest uncertainties in our current estimates of climate change.

The application of iSPEX is two-fold: It enables crowd-sourced measurements of tiny atmospheric particles – aerosols – at locations and times that are not covered by current air pollution monitoring efforts; and it makes atmospheric science accessible to everyone, through active participation in making scientific measurements.

The iSPEX app instructs participants to scan a cloud-free sky while the phone’s built-in camera takes pictures through the dedicated add-on. Each picture taken through the iSPEX add-on contains information on both the spectrum and the linear polarization of the sunlight. The measurements taken using the phone camera can provide unique information about the properties of the particles in the air, including the amount of particles, their size distribution and the type of particles. This type of measurement is crucial in assessing the impacts of atmospheric aerosols on environment and health.

For the setup of the pan-European campaign the iSPEX-EU team, led by Leiden Observatory, is working closely with local partners in all cities, including research organizations and environmental protection agencies. These partners are taking up the co-ordination of the citizen science campaign in their city. They play a crucial role in recruiting and motivating citizens to actively participate by performing numerous iSPEX measurements throughout the campaign period, which is the key to a successful iSPEX-EU campaign.

iSPEX-EU is organised as part of the EU-funded project LIGHT2015 and is one of the many activities running during the International Year of Light and Light-based Technologies 2015, the worldwide celebration of light and light-based technologies.

The following video explains the principles and procedures of the iSPEX project: