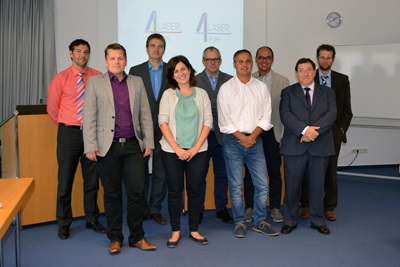 A new European project to train young researchers in laser surface engineering techniques is formally up and running, following a kick-off meeting hosted by the Fraunhofer Institute for Material and Beam Technology (IWS) in Dresden, Germany, earlier this month.

Armed with €3.5 million awarded by the Horizon 2020 Marie Skłodowska-Curie funding mechanism, the “Laser4Fun” program (Fun is short for “Functional”) will focus in particular on scaling up the application of ultrashort-pulse lasers to an industrial scale.

Though officially co-ordinated via the Spanish wing of industrial partner BSH Group, which sells domestic goods, much of the relevant expertise will come from Fraunhofer IWS. It develops a wide-range of materials processing techniques, including laser ablation, cutting and welding, as well as additive manufacturing.

Together, they are aiming to recruit and train up to 14 PhD candidates in the latest laser technologies for surface engineering – including a method called direct laser interference patterning (DLIP). The techniques are expected to find applications in sterilization of medical equipment and various industrial niches.

“Using the latest laser techniques, many surfaces of existing products can be accurately treated,” stated Fraunhofer IWS in a release announcing the start of the training effort. “The technique can replace the special coatings that are currently applied to existing materials for surface improvement.”

Speed challenge
IWS experts believe that the biggest challenge in the project will be to increase the laser processing speed for industrial deployment. While ultrashort-pulsed lasers offer major potential advantages because they do not transfer any heat to a target material, their historical weakness has been low average power and therefore slow processing speeds.

“In order to apply the latest techniques further on an industrial scale, scaling-up is required,” reckons Fraunhofer IWS. As a result techniques like DLIP, in which multiple laser beams are combined to create an interference pattern, will be studied.

“This allows performing the operation much faster than it is done with one single laser spot,” they claim. The project will also work to develop hybrid technologies, in which laser treatment will be combined with other techniques such as chemical etching.

On the Laser4Fun project web site, the participants say that they are aiming to go “far beyond” the current state-of-the-art for laser materials processing by focusing on the development of new surface micro/nano-structuring/patterning methods with short- and ultrashort-pulse laser technologies.

“The research will focus on the interaction of laser energy with several materials (metals, semiconductors, polymers, glasses and advanced materials) and on new surface functionalities like tribology, aesthetics and wettability,” they write.

In addition, the consortium wants to establish an innovative training program to coach a new generation of creative, entrepreneurial and innovative early-stage researchers focused on laser surface engineering.

• Laser4Fun organizers are currently recruiting for PhD candidates at the various participant institutions. For more details, visit the "vacancies" section of the project web site.