Lasing within organic cells could allow both sensing and treatment in vivo. 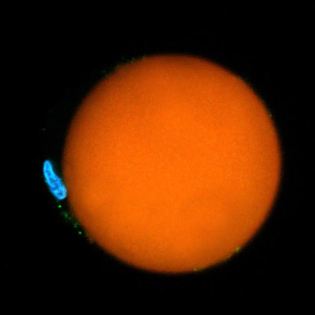 The technology behind cell lasers and the generation of coherent light from organic materials has been developing steadily since the core principles were first demonstrated in 2011.

Although the term "cell laser" has been used to broadly label any technique in which a laser and organic cells are coupled, the primary emphasis was initially on the expression of suitable fluorescent biological protein material within a cell, allowing it to act as the gain medium for stimulated emission.

That technique could be highly valuable in certain scenarios, especially in sensing applications or in studies of intracellular events. But as Seok Hyun Yun of Harvard Medical School, one of the original co-developers of the concept, commented, higher impact applications were always likely to follow the development of self-contained laser sources within cells.

Yun and his colleague Matjaž Humar have now reported doing exactly that, in work published in Nature Photonics.

"Stand-alone cell lasers are an exciting direction to pursue," commented Yun. "They require development of an optical cavity that is effective, biocompatible, and small enough to be placed within the living cells."

The Harvard project explored the use of different different kinds of microresonator, all tiny and robust enough to be introduced into a cell and still function inside it. One version was soft, formed either by injecting oil into the cell or by using cells which naturally contain lipid droplets of suitable dimensions; another type was hard, exploiting the ability of certain cells to internalize fluorescent polystyrene beads of up to 20 microns diameter.

In either case, the microresonators were designed to support whispering-gallery mode (WGM) behavior, in which light circulating in the transparent spherical object is trapped by total internal reflection at the interface between resonator and cell.

"We pump the molecule with pulses of 5-nanoecond duration, aiming to excite as many of the resonators as possible at the same time," said Yun. "The pump power needs to be high enough to cross a certain threshold and not enough to damage the cells; but in practice there is a good dynamic range there to work with."

In the earlier studies of cells expressing suitable fluorescent proteins, Yun had already found that the thermodynamics worked in his favor. The residual heating effects of a 5 ns pulse used to excite the fluorescent proteins was not enough to raise the cell's temperature by more than one degree or so, well short of the amount needed to cause denaturating.

Fighting cancer
In the new Harvard study, Yun introduced microresonators to HeLa human cancer cells and two cell types drawn from mice: white blood cells, and fibroblast cells normally found in connecting tissues. This provides an indication of the variety of cells which might be suitable for the technique, one potentially compelling virtue of cell lasers as a class of photonics tool. "In theory, any type of cell can be used for cell lasers," Yun noted.

Although therapeutic use is still some way off, Yun envisages these modified cells being used to deliver specific photo-sensitive medication to highly localized areas in target tissues, such as cancerous tumors.

The prospect of using cell lasers in cancer treatment was also discussed in another recent paper on the technology, from the University of St Andrews. Malte Gather, a former postdoc in Yun's project and now at St Andrews, described the prospects for using such cells to monitor metastasis at single-cell resolution in an interview with Optics.org this week.

"I'm very happy to see this result from St Andrews," commented Yun. "Although the field is growing and more papers in this field are coming out, we have not seen any other group make these strides."

As the concepts of injectable, biocompatible lasers are fully exploited and the potential variations explored, one productive avenue of research could be the ability to engineer the shape of the intracellular WGM cavity, which is not limited to spheres and could potentially include cylinders, toruses and disks. This in turn may allow cavity engineering for specific mode selection or directional radiation.

In Nature Photonics, the team describe the potential use of beads with different diameters to tag individual cells, combining different beads and fluorescent wavelengths to individually monitor larger numbers of cells than current state-of-the-art techniques can manage.

A significant impact
The previous research into cells lasing through the expression of suitable proteins is still a potentially valuable area of study too. Such materials may well prove to be useful in sensing operations, providing the opportunity to assess changes in output light as the environment of a cell alters.

"The most distinct characteristic of cell laser output, relative to fluorescence emission, is its narrowband spectrum; less than 0.1 nm compared to 30 to 60 nm," Yun said. "This feature can be used for intracellular sensing methods, where variations in the distribution and concentration of the gain molecules, or changes to the cell's shape or environment, will in turn alter the output wavelength. A narrowband output makes it easier to measure a small spectral shift."

Cancer studies could again be an early beneficiary, with cell lasers able to respond to the changes in physical properties that cancer cells go through during their development cycle, and measure the mechanical stiffness in both the cells and the extracellular tissues.

"There are still some big fundamental questions about where work on cell lasers will lead, " commented Yun. "But the goal is to eventually make a significant impact in health care."