Group at St Andrews shrinks optical resonators, which are "swallowed" by cells in vivo, for cancer investigations. 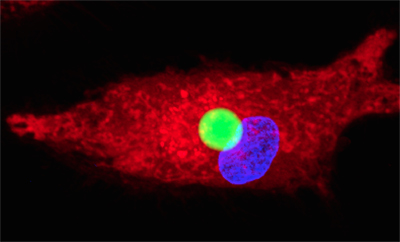 Researchers at the University of St Andrews, Scotland, UK, are claiming a photonics-based breakthrough in biomedicine; having successfully tracked a day-in-the-life of a number of white blood cells by feeding them microlasers, according to a research report published in Nano Letters The technique is expected to allow new insights into how cancers spread in the human body.

The Soft Matter Photonics Group led by Professor Malte Gather of the School of Physics and Astronomy, in collaboration with immunologists in the University’s School of Medicine, found that by “swallowing” an optical micro-resonator, cells gain the ability to produce green laser light.

The team says this miniature technology may soon be developed into a useful tool in biomedical optics: the spectral composition of the laser light generated by each cell is different and can be used to distinguish and track large numbers of cells over prolonged periods of time.

In their initial study the researchers demonstrate tagging of a few dozen human white blood cells and then track the cells for a day. In principle, the approach allows barcoding and reliably distinguishing up to several hundred thousand cells simultaneously. 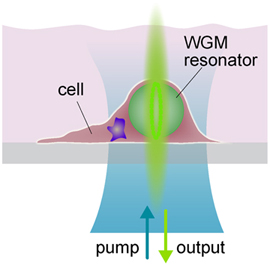 Schematic of a hmnan cell containing the micro laser.

Research groups around the world have worked on lasers based on single cells for several years now. However, all previously reported cell lasers required optical resonators that were much larger than the cell itself, meaning that the cell had to be inserted into these resonators. By drastically shrinking resonator size and exploiting the capability of cells to spontaneously take up foreign objects, the latest work now allows generation of laser light within a single living cell.

Dr Gather said, “This miniaturization paves the way to applying cell lasers as a new tool in biophotonics. In the future, these new lasers can help us understand important processes in biomedicine. For instance, we may be able to track—one by one—a large number of cancer cells as they invade tissue or follow each immune cell migrating to a site of inflammation.”

He continued, “The ability to track the movement of large number of cells will widen our understanding of a number of important processes in biology. For instance being able to see where and when circulating tumour cells invade healthy tissue can provide insight into how cancers spread in the body which would allow scientists to develop more targeted therapies in the future.”

The investigators put different types of cells onto a diet of optical "whispering gallery" micro-resonators. Some types of cells were particularly quick to ‘swallow’ the resonators; macrophages—immune cells responsible amongst other things for ‘garbage collection’ in our body—internalized the resonators within less than five minutes. However, even cells without particularly pronounced capacity for endocytosis readily internalized the micro-resonators, showing that laser barcodes are applicable to many different cell types.

What is the origin and structure of the whispering gallery mode resonators?

The microresonators are micro-spheres made of the polymer polystyrene, which is doped with a brightly fluorescing green dye. The micro-spheres all have slightly different sizes, which means that their optical characteristics (i.e. the resonance wavelengths) differ between different resonators. 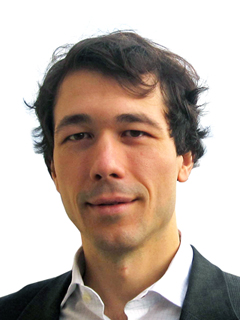 How are the microresonators inserted into cells without rejection?

We have made use of endocytosis, the natural capability of cells to take up foreign objects. Under appropriate incubation conditions, a range of different types of cells are able to “swallow” the microresonators. We have then also investigated whether the resonator has any detrimental effects of on the cell and we found that cells with resonators remain viable and motile for at least four weeks. (The longest we studied and longer than most experiments in cell biology.)

Which types of living cells have been investigated?

So far we have performed our experiments with HEK 293 cells (HEK = human embryonic kidney; this is a human cell line); NIH 3T3 cells (this is a cell line derived from mouse fibroblasts). Cell lines means that these cells are 'immortal', i.e. they continue to divide indefinitely. Both HEK 293 and NIH 3T3 are frequently used as model cells or for general molecular biology experiments.

We have also performed experiments with primary cells, i.e. cells directly extracted from a live organism. We have done this with human macrophage cells (i.e. white blood cells) taken from a healthy donor and with mouse micro-glia cells (these are cells from the brain of the mouse). In all cases the cells took up the resonators by endocytosis.

What are your further objectives?

We believe these self-contained cell lasers have great potential to become a widely used tool in biology. Conventional fluorescent tags have rather broad emission spectra which means that one can only distinguish a limited number of different tags. The narrow spectrum of the cell laser facilitates distinguishing hundreds of thousands of different tags.

I anticipate that the availability of such a tool will lead to new insights in cancer research as it would allow one to monitor how the cells from a tumor form metastasis, providing single cell resolution; i.e. one could see exactly which cells and how many cells from a primary tumor invade healthy tissue and form a new tumor site. Our objectives are to develop the technology further, by confirming accuracy, improving speed, and reducing the size of the micro-resonators required to guarantee that their presence does not influence the behavior of the cell.