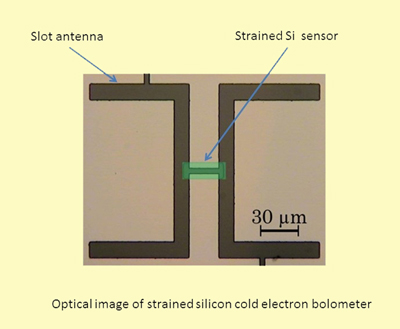 A new type of terahertz sensor, claimed to be much faster than competing technologies used to detect and identify hidden objects, has been developed by scientists at the University of Warwick, UK.

Called Q-Eye, the invention senses radiation across the terahertz (THz) region of the spectrum – between microwaves and infrared. It works by detecting the rise in temperature produced when electromagnetic radiation emitted by the target object is absorbed by the Q-Eye sensor, even down to the level of a single photon.

The developers say that the device could help address the security weaknesses reported in the past month in America’s Transportation Security Administration ("TSA does not work" – The Atlantic), where mock weapons and explosives were smuggled through airports, undetected in 95% of cases.

The terahertz technology may also prove useful in discovering concealed goods in the retail industry or for non-destructive monitoring, for example quality control in drugs or food. Other applications include astronomical and climate science observations and medical diagnosis.

Professors in Warwick’s Nano-Silicon Group, Physics Department, Evan Parker and Terry Whall, led the team which developed the device. Professor Parker commented, “We were very surprised when our first very crude prototype showed such impressive speed and detection performance and our initial calculations indicated world-beating detector capability – all this and using silicon.

"Speed is a big parameter in terahertz detection, higher speed enabling multifrequency imaging, and thereby better and more informative images and higher frame rate video for higher throughput. For 300K devices [temperature, K] generally used in terahertz systems, response times are typically in range milli- to microseconds. But with our first crude device, response time was less than 1 microsecond and likely 10ns achievable. Designs are possible that could even yield 10 picosecond response times."

The Warwick devices are made using standard silicon processes; large numbers of detector chips containing designs matched to a particular application can easily be fabricated on 300mm wafers with great uniformity. The patented terahertz device involves a thin film of aluminum deposited on top of a silicon layer placed under strain, which is used to create an electronic cooling process.

The electrons in the silicon layer are so isolated from the silicon lattice they become highly sensitive to incoming radiation. This revolutionary e-cooling process is the secret to Q-Eye sensor’s performance, enabling rapid imaging and material identification.

Professors Parker and Whall are currently working on a demonstrator of the device, having been awarded a £100,000 Smart award from Innovate UK. The work is moving out of academic research into the commercial world, offering opportunities for partnership and investment. Companies involved in the personnel screening market have already expressed interest in the Q-Eye device. 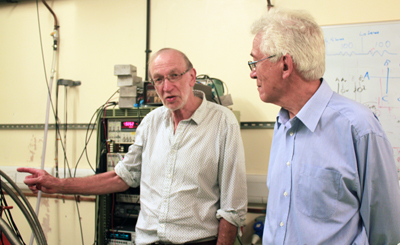 Warwick Ventures, the university’s technology transfer business, has helped the professors to create a spin-out company, Q-Eye Ltd, to develop and market the technology. Melody Stokes, Warwick Ventures' Business Development Manager, and Phil O’Donovan, Warwick alumnus and a Cambridge-based business angel, are working with the academics to build the commercial team, secure commercial partners and raise funding to develop the first commercial prototypes.

Professor Parker told optics.org, “Terry Whall and myself are excited about this new company. We anticipate that our terahertz device will have applications in personal security, scanning and various medical sectors. Certain adaptations could be made to the device to allow diverse applications. We think that the market will open up now that there are new products arriving from various suppliers.

optics.org last month reported on the proliferation of suppliers of and of applications for terahertz technologies, underscored by a busy panel session at the LASER World of Photonics show in Munich.

Professor Parker continued, “We are hopeful that it will become a significant undertaking; it’s early days and we are an early-stage company. We are still looking for further investors into Q-Eye so potential investors are invited to contact us.

”We differentiate ourselves from other terahertz systems suppliers because the sensitivity of our sensor is much higher and our processing speed is greater than anything else in the marketplace at the moment. There is at this point no killer app in the terahertz marketplace but the device we have developed, we have measured and fund it to have an incredible, staggering performance. We expect to be producing regular products in about three years.“