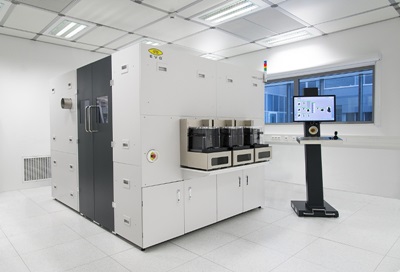 “Hercules” is based on nanoimprint lithography (NIL) – technology that is much simpler than the lithography scanner systems used to make logic and memory chips in huge volumes, and which works by “stamping” patterns onto target materials.

EVG says that its new system combines pre-processing steps like cleaning, resist coating and baking with the crucial large-area NIL process in a single platform, claiming “industry-leading productivity and throughput” and the ability to ramp up the NIL process.

The firm is aiming the product squarely at producers of novel kinds of photonic devices who want to scale up their manufacturing processes while avoiding the complexities and expense associated with more typical lithography equipment.

Although NIL cannot produce patterns with the tiny dimensions required in state-of-the-art transistors, it can imprint structures ranging from tens of nanometers up to several micrometers in size.

“Technological maturity”
From an optical point of view, those structures can be used to alter surfaces and devices, for example anti-reflective layers, color or polarizer filters, or light-guiding plates. They can also be incorporated into sapphire substrates that are patterned to maximize light output from LEDs, or used to improve light capture by solar cells.

The Hercules system could also be used to manufacture MEMS or NEMS components for applications in biology or electronics, says EVG.

Paul Lindner, the company's executive technology director, said: "EVG has been an early pioneer in the development of NIL equipment. After more than a decade of research and continuous improvements, EVG has now propelled NIL technology to a level of maturity that enables significant advantages for certain applications compared to traditional optical lithography.

“In addition, the Hercules NIL allows a wider array of applications, particularly in the fields of photonics and biotechnology, to finally leverage the cost-of-ownership and resolution benefits of NIL in volume production.”

High throughput
In terms of throughput, the system is said to be capable of patterning 200 mm-diameter wafers at a rate of 40 wafers per hour. “Systems have already been installed and are being used for high-volume manufacturing at production sites of leading photonic device manufacturers,” claims the firm.

The Hercules launch follows EVG’s establishment late last year of a photonics-focused center for nanoimprint lithography technology at its headquarters in St Florian, including a pilot manufacturing line.

At the time, the company said that its “NILPhotonics Competence Center” would help to shorten both the time-to-market and production cost for new photonic devices, compared with more conventional lithography.

EVG is not the only organization offering NIL technology, although it does claim to be the only one selling equipment with the kind of throughput needed for true volume production.

Other firms working in the field include Germany’s SUSS Microtec, whose UV-NIL system is said to offer sub-50 nm resolution. Back in 2010, SUSS said that it was collaborating with Californian start-up Rolith on a novel kind of NIL technique based around a cylindrical rolling mask.

In 2013, the two firms added that a second-generation version of the tool – built by SUSS under an exclusive license from Rolith – had been installed at an Asahi Glass research facility in Tokyo. The Japanese firm was said to be working on anti-reflective architectural glass based around nanostructure arrays mimicking the compound eyes of insects.