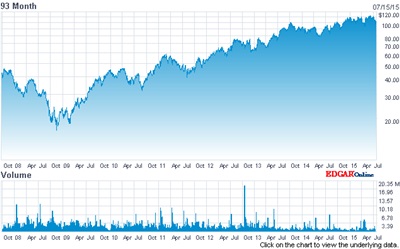 Payment for tools being shipped to new fabs drove ASML’s total sales to €1.65 billion in the second quarter of the year, slightly up on the opening three months of 2015. Wennink now expects the second half of the year to remain just as strong, with annual sales likely to eclipse last year’s record figure of €5.9 billion as a result.

While those figures relate almost entirely to deep-UV lithography tools, on the extreme ultraviolet (EUV) front ASML booked orders for six systems from the “major US customer” that in April was revealed to be purchasing 15 of the €100 million-plus tools. That customer is presumed by Wall Street to be Intel. Two production systems will be shipped this year, followed by another four next year.

And while only five EUV systems in total are now expected to ship in the remainder of this year – a planned sixth has been pushed back to early 2016 – Wennink highlighted a recent upgrade of EUV sources already in the field from 40 W output to 80 W output as evidence of the progress being made.

Productivity targets
Wennink said that EUV source power of 130 W had now been demonstrated internally, while average system availability – the other critical contributor to tool productivity – had improved from a typical level of 50-55 per cent to more than 70 per cent at multiple customer sites.

A new drive laser from Trumpf that will ship with the latest “NXE:3350B” systems will provide a source power of 125 W, something that at current system availability levels will deliver a throughput of around 750 wafers per day. Improvements to tin droplet generators and other system tweaks should increase that figure to the targeted 1000 wafers per day at some point next year, by pushing the availability figure closer to 85 per cent.

“Given the recent advances in EUV productivity and availability, we believe that EUV is moving closer to volume production,” he added in a statement issued by the Veldhoven firm. “In preparation for pilot production, several customers have run or are running marathon tests on their NXE:3300B systems.” One customer has achieved an average tool availability of 70 per cent over a four-week period.

Speaking in a conference call with investors from San Francisco – where the Semicon West trade show is currently taking place - the CEO expanded on that, noting that one customer had now managed to expose 1022 wafers to EUV during a 24-hour period.

“EUV faces normal new technology introduction challenges but its adoption is now a matter of when, not if,” reported the firm in its investor presentation. “EUV will continue to enable Moore’s law and will drive long term value for ASML.”

7 nm ‘node’ insertion
Although there is a possibility that some additional EUV systems will be ordered for the later stages of the 10 nm technology “node” for which logic chip makers are currently making plans, Wennink said: “It is clear that the [EUV] insertion is now focusing on [the] 7 nm [node].”

In the meantime, the average selling price of deep-UV lithography tools being sold by the company is going up, driven by the additional complexities involved in manufacturing the latest semiconductor devices.

And in preparation for the anticipated ramp in demand for EUV tools as preparations for the 7 nm node gather momentum, ASML has now opened its new Veldhoven factory dedicated to EUV systems.

The company still expects to ship 24 EUV tools from that factory in 2017, while last month its key laser supplier Trumpf said it would invest €70 million in a new building to make the high-power carbon dioxide lasers that are fired at tin droplets to generate EUV light in the systems.

The drive lasers being built by Trumpf for the first production EUV tools comprise four 16 kilowatt lasers working in concert to generate the necessary source power. The company says that the expansion at its Ditzingen headquarters to accommodate expected EUV demand should be completed within two years.

• ASML's stock rose in value by around 5 per cent in early trading on the Nasdaq exchange following the company's latest earnings call. At around $108, it continues to trade at close to an all-time high.