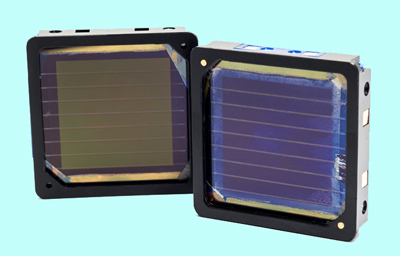 Imec’s perovskite module achieves a geometrical fill factor of more than 95% and an aperture conversion efficiency of 11.3%. The active area efficiency was demonstrated with 11.9%. These record devices have been fabricated by the conventional lab-scale spin coating process.

Robert Gehlhaar, a researcher on Imec’s perovskite development project gave optics.org further explanation: “We improved the fabrication process. Increasing efficiency from 8% to 11% seems huge but it is a logical development. In fact he lab record for perovskites on cells of less than a 1cm2 active area is above 20%.

"Besides the area loss of 5% due to module patterning, there is no fundamental limitation why modules cannot achieve the same efficiency as small area cells. Considering that Imec’s lab cell record is far above 11% - in the range of 16-17% - even higher module efficiencies can be expected in our lab in the near future.”

Imec develops a platform for glass-based perovskite modules and collaborates with Solliance, a cross-border Dutch-German-Belgian thin-film PV research initiative. Imec is also exploring stacking a perovskite cell on top of a silicon solar cell to increase the conversion efficiency of silicon solar cells. In this scheme, the perovskite cell will capture the light not absorbed by silicon, so enabling conversion efficiencies of more than 30%.

Gehlhaar said a number of companies are already working on the upscaling and commercialization of perovskite thin film PV. “For example, Dyesol has recently joined the Solliance Hybrid-Organiv PV program and Oxford PV is collaborating with imec, to name two major players in this field.

”The high device efficiencies combined with low material and fabrication costs are bringing perovskite into a leading position for future thin-film PV technology. If processing on large area is attained on industrial equipment and packaging provided to ensure long-lived device stability, cost-of-ownership calculations indicates that perovskite modules could be even cheaper than CdTe, which is currently the cheapest thin-film PV technology available in the market,” he added.