LED and lighting firm set to invest in itself with another major share buy-back plan. 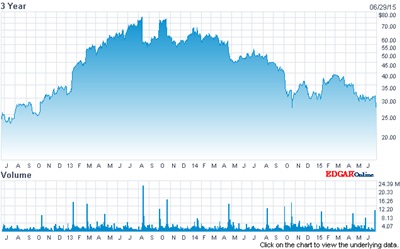 US-headquartered LED lighting company Cree is expecting to take an $85 million hit as it reduces the number of factories it uses to manufacture its LED chips.

Responding to what long-time CEO Chuck Swoboda described as a cycle of “aggressive” pricing of LEDs that has its roots in excess capacity for chips being used in display backlighting applications, the move will see LED production at its two current fabs in Durham, North Carolina, consolidated into a single building.

The company is also planning a spin-off of its radio-frequency and power semiconductor business at the moment, and the changes will see LED production move out of what will become a dedicated RF and power device factory.

Swoboda said that the move would “right-size” the company’s LED manufacturing footprint, and should result in a factory utilization of 80-90 per cent next year, a “much healthier” level than at present.

Sudden ASP slump
The CEO stressed that while demand for LED chip volumes had followed the expected pattern, a sudden drop in average selling prices first apparent in the April-May time frame had taken Cree by surprise.

As a result, Cree is now predicting that sales in its latest quarter will come in at only $375 million, well outside the range of $420 million-$440 million forecast just a couple of months ago. Swoboda said that $35 million of that anticipated shortfall could be attributed to LED revenues.

“While this is a challenging time it is a cycle,” he told a hastily arranged conference call with analysts, adding that he still saw innovation in the sector as critical for success.

The changes will see Cree concentrate increasingly on higher-value consumer products such as bulbs with qualities such as a high color rendering index.

News of the factory consolidation sent Cree’s stock plunging around 10 per cent in value to a three-year low to around $27 on the Nasdaq stock exchange, equivalent to a market capitalization of just under $3 billion.

The company’s management has also decided to take advantage of what it sees as that attractively low price with another major share repurchasing program. Having only just completed a $550 million repurchase, its board of directors has now authorized a further $500 million of similar spending in the company’s new fiscal year, which is about to begin.

Thanks to several years of highly profitable operations, Cree has retained a large cash pile – as of March 29 that pile stood at $782 million.

But its profits have shrunk in more recent times in an increasingly competitive environment as LED-based bulbs have become widely adopted by consumers. Earlier this year the company was also hit by the extreme winter weather in the northeastern US as it reported a 98 per cent annual decline in net income.