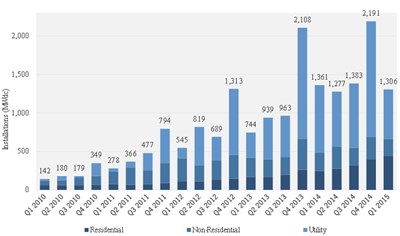 New reports from two analyst companies have confirmed continued rapid growth in demand for solar photovoltaics (PV) in the US, partly as a result of a looming tax credit deadline for utility-scale projects.

The second reason is a sharp uptick in residential installations – a market segment where until recently the US has lagged other developed economies. Greentech Media Research (GTM Research) and the US Solar Energy Industries Association (SEIA) reckon that 437 MW of residential PV was connected in the opening quarter of 2015 – up 76 per cent on the same period last year.

Despite that boom, PV deployments in the country remain led by utility ventures, with analysts at IHS saying that there has been a “noticeable increase” in the number of large-scale PV projects aiming to become operational before the end of next year.

That is being driven by the expected expiration of the 30 per cent energy investment tax credit (ITC) at that point, with a planned cut to 10 per cent tax relief reflecting the growing competitiveness of PV in the country’s energy mix.

Christine Beadle, senior analyst at IHS, said: “Newly proposed projects appear to be primarily located in less contentious areas and developed at sizes that are likely to promote a high potential for success in a short time. Recent project approvals by the Bureau of Land Management encourage installations in designated Solar Energy Zones.”

The project pull-in means that there is now a pipeline comprising around 32 GW of these large projects – defined as those with an anticipated power output of 5 MW or more.

Texas pipeline
As usual, California is leading the charge, accounting for fully 44 per cent of the projects under construction. North Carolina is second, with 19 per cent, ahead of Texas with 7 per cent.

The Texas pipeline includes a 150 MW project for Austin Energy that will be completed by Canadian Solar following its recent acquisition of Recurrent Energy. In terms of PV module providers, IHS reported that Hanwha Q Cells in Korea is set to supply 1.5 GW of products across sites in multiple states.

Beadle and her colleagues add that the completion of these projects prior to the deadline could be crucial to ensure their financial viability. And while an extension of the 30 per cent ITC rate into 2017 or beyond would clearly drive further growth, the team says that looks unlikely at this stage.

However, the growth in residential applications looks ready to dampen the effect of the ITC change. The latest GTM Research/SEIA report puts total Q1 2015 PV installations in the US at 1.3 GW – with both residential and utility PV adding more capacity than the natural gas industry.

“Collectively, more than 51 per cent of all new electricity generating capacity in the US came from solar in Q1 2015,” it concludes, adding that the average cost for a residential solar system had dropped by 10 per cent over the past 12 months, to $3.48 per Watt.

Residential boom
SEIA and GTM Research reckon that some 7.9 GW of PV will be installed across the US this year, a figure that would represent growth of 27 per cent on 2014. “Growth will occur in all segments, but will be most rapid in the residential market,” they add.

They put utility-scale installations for the opening quarter of 2015 at 644 MW - down significantly on the same period last year - but backed up the IHS findings, noting that that there were now 25 project developers with pipelines of 100 MW or more in development. GTM Research also expects a flurry of activity in the utility segment over the next 18 months ahead of the scheduled decline of the 30 per cent federal ITC. 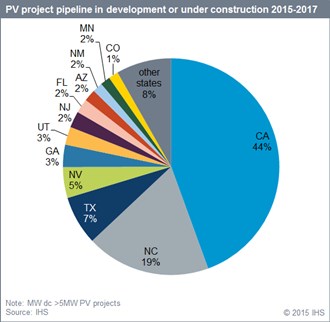 “Q1 2015 provided a clear glimpse into the future role that the residential sector will play as a primary driver of not only solar market growth, but the overall electricity generation mix,” said Shayle Kann, a senior VP at GTM Research.

Meanwhile SEIA president and key PV cheerleader in the US Rhone Resch added: “Solar continues to be the fastest-growing source of renewable energy in the US. By 2016, the US will be generating enough clean solar energy to power 8 million homes.

"That means solar will offset 45 million metric tons of damaging carbon emissions – the equivalent of removing 10 million cars from our roads.”